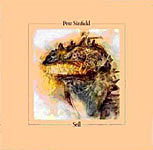 He may not have stepped onstage during the early heyday of In the Court of the Crimson King (DGM Live, 1969) through Islands (DGM Live, 1971), but lyricist Pete Sinfield was as much a member of seminal art rock group King Crimson as its performing members. A shot heard around the world, Crimson's debut was a confluence of many factors, unequivocally including Sinfield's flowery and sometimes obliquely analogous prose. When Sinfield left Crimson in 1971, citing irreconcilable differences with the group's remaining cofounder, guitarist Robert Fripp, his career appeared to be over. Instead, Sinfield jumped into production with Roxy Music's eponymous 1972 EG/Island debut, and continued to contribute lyrics to ex- Crimson members Ian McDonald and Michael Giles for McDonald and Giles (Island, 1970), Emerson, Lake and Palmer on Brain Salad Surgery (Atlantic, 1973), and English-language albums by Italian progsters PFM.

Sinfield's solo debut, Still (Manticore), was largely lambasted when it was released in 1973. Esoteric's double-disc reissue, however, reveals an album undeniably of its time which—despite certain unavoidable weaknesses—does fare better four decades on, now assessable on its own merits rather than in comparison to Crimson. Sinfield's relatively weak voice is still the album's greatest liability, though a certain vulnerability works well on songs such as the ethereal "Song of the Sea Goat" and the pastoral "The Piper." His narration on the title track works because there's rarely anything quite like hearing a poet read his own words, but when he hands off the chorus to Greg Lake, like a baton in a marathon, it's because he simply hasn't got what it takes to lift this majestic tune where it belongs.

Lyrically, "Wholefood Boogie" is as dated as Islands' "Ladies of the Road," but overall the pen responsible for legendary Crimson tunes such as "I Talk to the Wind" is as aureate and, at times, rococo as ever. What's surprising is the variety Sinfield demonstrates in the music, ranging from the countrified "Will It Be You" and rocking "Wholefood" (despite some especially cringe-worthy singing) to the funky, horn-driven "The Night People." With a range of guests from Crimson circles and beyond, it's woodwind multi- instrumentalist Mel Collins' arrangements for guests including pianist Keith Tippett, trombonist Chris Pyne, and Cor anglais player Robin Miller that make Sinfield's good music even better.

Sinfield's use of a string synthesizer, rather than the tape-driven mellotron, also distances Still's lighter ambience from Crimson's greater gravitas. A second disc of early mixes, an unreleased track from the same sessions (the folksy "Hanging Fire") and a 1975 track from the follow-up that never happened (the pop ballad "Can You Forgive a Fool?") are all nice-to-haves, but it's Esoteric's careful attention to remastering and packaging, with liner notes from Crimson documenter Sid Smith, that make Still (Expanded Edition) the definitive version of Sinfield's sole solo album, and a tremendous improvement over the poorly resequenced Stillusion (Voiceprint, 1993). A footnote in the annals of progressive rock, perhaps, but one that certainly deserves another look.