BY MARTIN LONGLEY
March 8, 2010
Sign in to view read count 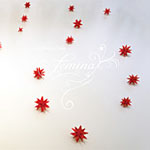 There are two notable elements to this album, before even listening to its contents. One is that composer John Zorn has created a work that pays tribute to female creators (his name checks include Yoko Ono, Agatha Christie and Joan Of Arc). The other is that he's making a return to his fabled file-card system of composition. The Cobra piece was the most notorious, notable and potent manifestation of this technique, where Zorn would prepare musical strategies to be spontaneously displayed in front of his playing cast, prompting immediate action and exacerbated resourcefulness.

In keeping with both title and concept, all six Zorn-pawns are female: Jennifer Choi (violin), Okkyung Lee (cello), Carol Emanuel (harp), Sylvie Courvoisier (piano), Shayna Dunkelman (percussion) and Ikue Mori (electronics). Laurie Anderson makes a brief appearance, providing a short opening narration. The lavish disc packaging is suitably female (whatever that is) and includes a substantial booklet of Kiki Smith's images, although many of these veer towards bland postcard art.

In describing the music, it's impossible to avoid visions of the filmic, as Zorn's card-prompts cause a sequence of episodic and contrasting incidents to parade themselves. The suite is divided into four parts, the first three hovering around 10 minutes apiece while the fourth is a mere three, concluding with a vaguely Japanese melody. The presence of so many chamber instruments leads to an unavoidably diaphanous nature, but Mori's fierce laptop emissions act as a frequent disruptor. In typically shape-changing fashion, Zorn stage-manages a multiple personality mashup, alternating silken abstraction with cluttered aggression. Presumably, this was all recorded in real-time, with no overdubs. That would be a more noticeable achievement on the live stage, but is particularly impressive in view of some of the percussive density and suddenly compacted laptop activities.

A pulsating chamber ensemble regularity develops, is banished several times, returning, broken asunder by blurts of electro-barrage. Tonally-singing cello and violin fly over cantering piano and percussion, then a rending, hyper-martial ritual explodes into ceremonial angst. Mori is going beyond her accustomed sonically processed abstraction, featuring actual recognizably real-world sounds. Transitions are frequently made with microscopic detail and Emanuel's harp is often the most distinctive sonic ingredient, along with Mori's samples.

Femina is a procession of beguilingly atmospheric events, less savagely jump-cutting than most of Zorn's previous card-pieces. It's dramatic, but not always linear. This is its strength.