BY JIM SANTELLA
December 3, 2003
Sign in to view read count 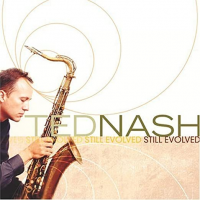 Ted Nash's work with Lionel Hampton, Quincy Jones, Toshiko Akiyoshi, Don Ellis, the Mel Lewis Jazz Orchestra, the Herbie Nichols Project and the Lincoln Center Jazz Orchestra has earned the saxophonist a reputation for living in the mainstream. At 43, he’s in a position to continue shaping the landscape of straight-ahead jazz through his innovative ideas.

The title of Still Evolved refers to the growth we’ve witnessed in the modern mainstream during the jazz resurgence of the past decade. That it will continue to grow and blossom and produce strange fruit is a given. This session of Nash originals leads the way. Traces of Sonny Rollins, Wayne Shorter and John Coltrane show up clearly in the program. Nash’s pure tone and delicate technique emphasize beauty. With Wynton Marsalis on half the tunes and Marcus Printup on the other half, the saxophonist finds himself exploring those qualities that we look for in good musicianship.

While interpreting his lovely ballad “Bells of Brescia,” for example, Nash and Marsalis go for the heart. Their solo voices take your breath away. The song’s mood transcends classical music and jazz through its searing heartache balance and convincing delivery. The album also has its weak points, however. “The Shooting Star,” for example, places Marsalis in the role of demonstrating trumpet exercises through a solo that moves stiffly in pre-planned phases. Nash’s solo voice, on the other hand, remains loose throughout the session, as he reinvents straight-ahead jazz again and again. “The Competitor” has a lively Caribbean tang, while “Point of Arrival” clings to a full, thrusting bebop formula and “Rubber Soul” contains the dramatic flair of a film soundtrack, which has been destined for award night all-time highs. The evolution of straight-ahead jazz is in good hands.