By Andrey Henkin
December 3, 2003
Sign in to view read count 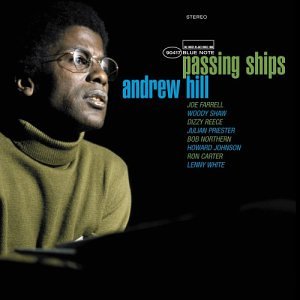 The history of Blue Note Records is in many ways the history of the golden age of jazz. When Blue Note changed, the whole face of jazz changed. After releasing classic sides one after another for much of the '60s, Blue Note veered off into populist funk and, despite its present renaissance, never really recovered.

With today's Blue Note subsisting on fewer quality releases and the RVG reissue series, its reputation of yore seems firmly in the past. If so, the occasional new "old" album released by the label is a rare opportunity to be part of those heady days. Pianist Andrew Hill, like Wayne Shorter, or Herbie Hancock, was one of the main proponents of the Blue Note style - heavy post bop that didn't shy away from experimentation. Hill's albums like Point of Departure or Compulsion probably would be mentioned in the same breath as Juju or Maiden Voyage if he had more consistent exposure.

By the late '60s, Hill's tenure at Blue Note was almost up and several sessions he recorded remained unissued, not seen as commercially viable. What has become the recently released Passing Ships is a rare chance to hear Hill's advanced melodic and harmonic concepts applied to a nonet including such musicians as Woody Shaw, Julian Priester, Joe Farrell and Ron Carter. The irony of this material lying dormant for 34 years is that this Hill is more commercial; apparently Blue Note didn't agree then but with interest resurging for the idiosyncratic pianist, Passing Ships is available now as a period document, a burning bridge away from '60s progressive jazz.

Hill's music doesn't translate very well to a big band, though this may be the strange audio levels and a presumed lack of substantial rehearsal. Howard Johnson's tuba sounds jarring on occasion, Ron Carter is underwhelming, and this is only rookie Lenny White's second session.

Bright spots include the double punch of trumpeters - Shaw and Dizzy Reece, both underappreciated and overshadowed by the era's more strident players. Even more satisfying is how the late Joe Farrell completely takes over, playing no less than five disparate instruments: soprano and tenor sax for lead work, alto flute and bass clarinet for moody ambience and English horn for stylistic filigree. What was originally a curio piece of large ensemble writing by Hill becomes an opportunity to see why everyone was so high on Farrell before he bottomed out on the CTI label in the '70s. Whatever he is playing, the music centers on him, the other musicians granting him well-deserved space.

But if you forget this is an Andrew Hill record, the twists of his compositions remind you. Much of the material is the typical bread-and-water post bop which Blue Note pioneered, Hill's leads calmly flowing through the steep ravine of the horns. Of the seven tunes, three are the length and intellectual meat of the album. The title track features all the perks of Hill's playing: suspensions, ostinatos, thought-provoking dissonances. "Plantation Bag" is quite a funky plantation, Hill's island roots in evidence. "Noon Tide" is the freest, most quintessential Hill piece; one segment demonstrates the subtleties of Hill's accompaniment. As Farrell leads, Hill comps underneath, distinctly changing the feel of the piece five times with his chord voicings. Hill, a product of an era that had many virtuosos, may be able to the most with the least, which is probably why his take on the avant-garde seems less dated than many.

While not his best album, and there may be other sessions more deserving of resuscitation, the moments where Hill stretches out and Farrell makes one strong contribution after another make one pine for the days when Blue Notes were the notes.