Peppe Merolla: Stick with Me 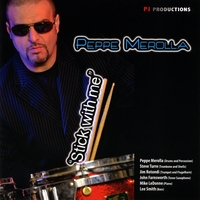 Peppe Merolla may not be a familiar name to most jazz audiences but a sampling of Stick with Me, his stellar debut as a leader, may well serve to change that fact. Born in Italy and hailing from an artistic family of actors and singers, Giuseppe "Peppe" Merolla followed in the family tradition doing a little acting and singing before pursuing his love for the drums and jazz. On this striking first outing, Merolla offers a decidedly hard bop-styled jazz set, approaching the music in an assertive manner evidenced by strong stick and rim shots and crowned by crisp cymbal work throughout the nine-piece repertoire of primarily original material.

Merolla moved to the U.S. because he wanted to live where jazz was born. Now residing in the New York area, the drummer—who states "I want to play this music with the best players in the world"—makes good on this goal by surrounding himself with some of the Big Apple's finest musicians.

The program begins with the drummer's tribute to his native "Naples," a dicey percussive Afro-Cuban number that ends up in straight jazz territory. Tenor saxophonist John Farnsworth tees off on the following "Ferris Wheel," peppered with voices from the other horns—trombonist extraordinaire Steve Turre and trumpeter Jim Rotondi—along with assertive bass lines and Merolla's rumbling climax. The bop sounds soften up a bit on the gentle "Junior," as Turré starts off the solos, followed by another Farnsworth mix, Mike LeDonne on electric piano and bassist Lee Smith's graceful bow. The other mellow number here is the Rotondi-arranged Willie Nelson ballad, "Crazy," led by warm tenor phrasings, Rotondi's muted horn work and sensitive play from the rest of the band.

The bop-ish original "A Cry For Understanding" is the album's centerpiece—featuring brisk work from the horns, while Merolla punctuates the number with his powerful stick work and crashing cymbals. But the highlight of this hard-bop set is the sizzling "Mozzin,'" on fire from the introduction, and smoking all the way through to the end, capturing several of Merolla's muscular solos.

Clearly an album of exceptional quality and an impressive debut,Stick with Me showcases a powerful performance from Merolla and marks an unforgettable entrance into the world of recorded music sure to stick with those that appreciate the perky nature of hard-bop jazz.