By Karl Ackermann
August 4, 2014
Sign in to view read count 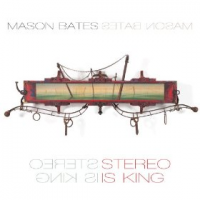 Modern composer and electronics artist Mason Bates is equally comfortable in the worlds of new classical and hip hop. Working closely with the symphony orchestras of San Francisco and Chicago, he has been a driving force in escalating the role of electronics in the orchestra setting. To that end, Bates has put years into the study of flow, process and the acoustics of the classical orchestra. The rewards of this discipline are shared with listeners on Stereo Is King.

Bates previous recording, Digital Loom (MSR Classics, 2009), incorporated similar elements but in a less relative manner, and as though it were the building blocks for Stereo Is King. Less atmospheric than structured, the latter collection consists of six distinctly autonomous works that have little in common with each other beyond the broader genre. Where Bates utilizes electronics, it is with the greatest of refinement and respect for the organic nature of his compositions.

Commissioned by the Chicago Symphony Orchestra, the title track is by turns, primitive and ambient. Percussionists Cynthia Yeh, Jacob Nissly and Eric Banks cross paths creating striking vibrations from very basic sources such as marimba, Tibetan prayer bowl and wood blocks. Bates transmutes the sound with electronic breaks and dense bass. Markedly different is "Observer in the Magellanic Cloud," a choral piece performed by the multi-Grammy winning group Chanticleer. The otherworldly composition hovers in a space that is both retrospective and modern.

Bates versatility as a composer is further displayed on "Difficult Bamboo." Multiple tones and sustained shimmering notes paint an idyllic soundscape here, though the twenty-three minute piece is frequently at cross-purpose with an off-kilter repetition of notes. The Claremont Trio—violin, cello and piano—lead "String Band," a modernized version of its namesake until the prepared piano of Donna Kwong morphs the piece into abstraction. Pianist Tania Stavreva closes Stereo Is King with an eye-opening performance. The Bulgarian native's solo performance on "White Lies for Lomax" is a stunning display of intricate blues playing and a highlight of the recording.

Bates is as much a musical visionary as a composer and technician. The assorted works on Stereo Is King bear little surface resemblance to each other though at a deeper level there are likely some very reliable theories and beliefs. The use of instruments as diverse as wood blocks and laptop is in itself a statement of the consistent universality of music in the face of changing technologies. Bates appreciates both natural and scientific developments and uses them independent of their place on the musical continuum. In doing so, he leaves the listener free of typical expectations and open to endless possibilities.