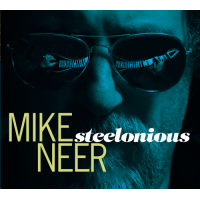 Early in his musical career, pianist and composer Thelonious Monk was ordained the "Hight Priest of Bebop." This sounds more like a disingenuous pronouncement by an overeager period critic than any credible music reportage. Monk's essential musical approach owed more to stride, blues, and swing than to Charlie Parker's and Dizzy Gillespie's bebop. Monk's technical brilliance, if one could call it that, was not geared toward the "technique" of rapid and complexly rendered chord changes. Monk's brilliance lay somewhere much more fundamental.

I think of Monk as a musical mutation. Genetically, a mutation is defined as, ..."the changing of the structure of a gene, resulting in a variant form that may be transmitted to subsequent generations..." If that does not describe Monk's influence on both jazz composition and the jazz standard songbook, then nothing does. Monk created a new musical language, vocabulary, and grammar. And he did all this serious stuff with a beautifully honed disregard for the musical status quo and a biting sense of humor that seems still lost on much of the listening media.

Monk was an enigmatic iconoclast (that is two fifty cent words adding up to a dollar). He remains misunderstood, because understanding him was never the point. This music is a relativistic variant that should have never entered our dimension, but did...and here we are. Monk has had many admirers and imitators, many creatively so. But none of Monk's interpreters has yet to "think beyond" to the degree that steel guitarist Mike Neer has.

Seemingly out of nowhere, Mike Neer appears, playing Monk like some radioactive Herbert Von Karajan addressing his cosmic Beethoven. And Neer does all of this with the wry and knowing smile of a man content just to be heard. How fortunate he has spoken loud enough, because projects like Steelonious happen so damn infrequently now that when they do arise, they are missed for all of the noise surrounding them.

What Neer effectively does is take an instrument associated with, in order, Hawaiian luau, Santo and Johnny's 1959 "Sleepwalk," and every Jackson Browne song David Lindley play on, and use it to transform the Monk book in a most wonderful and delightful way. Neer creates American vignettes with each composition. He begins his festivities with a Dick Dale Surf take on "Epistrophy," drummer Diego Voglino laying down a carpet bomb backbeat. Pianist Matt King issues a two-fisted cat-house upright solo, leading into Neer's interstellar vision of the slide guitar, sounding like a frantic '50s LA traffic jam. And, this is merely the beginning. "Bemsha Swing" is hippy trippy while "'Round Midnight" is performed like a Caribbean pipe dream, again with deft support by Voglino.

"In Walked Bud," typically played as an upbeat cooker, in Neer's hands it becomes a Mad Men's first heroin sniff with Sgt. Joe Friday looking in through the window. "I Mean You" is vintage Western Swing, replete with stoned ghost of Bob Wills heehawing in the background. "Off Minor," "Ugly Beauty," and "Ask Me Now" as they have never been presented. Neer's technique is so sharp and precise it is often hard to tell what instrument he his playing. That is an accomplishment. The perfect closer, "Blue Monk" rolls the disc to its coda with the entire history of the blues and jazz behind it.