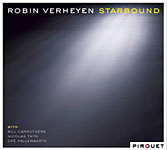 After studying in his native Belgium and in the Netherlands, expatriate saxman Robin Verheyen spent a year at the Manhattan School of Music, where one of his teachers was soprano sax wizard Dave Leibman. Anyone familiar with Leibman's work knows the ex-Miles Davis sideman's musical feet are planted firmly on the ground... although which planet that ground is located on has never been determined. That being said, the astounding music on Starbound proves Verheyen is either a native of that planet, or has visited it a few times, at least.

The opener "On The House" is basically up-tempo bebop, with Verheyen laying down a complex melody while pianist Bill Carrothers fills in the few blanks, building to create a truly interesting solo that's just on the edge of Out. It's not a head-bobber, but a chin-stroker—one of those moments that is usually accompanied by the phrase, "Hmmmm... Now that is interesting!" The interest grows when Verheyen takes over the spotlight and simply sets sail, moving his composition even closer to the edge as Nicolas Thys flies up and down the neck of his bass and drummer Dré Pallemaerts makes the background hiss like a snake.

Thys and Pallemaerts's unerring foundation gives Verheyen and Carrothers more room to fly, whether it's on the full-steam-ahead bopfest "Roscoepaje" (named for another Verheyen band) or the mid-tempo ballad "Boechout." Pallemaerts's percussion on "Waves" accentuates the piece's vivid visual images, while Thys' "Long Island City" offers a crackling taste of New York's singular energy. Where "Waves" imagines a warm contemplation by the sea, "Tree Line" is a walk in the woods on a winter's day that offers no warmth of any kind. Both pictures are painted by four talented artists, all working in sync.

If Carrothers had played "standard" piano over Verheyen's intense musings, the contrast would have been too great. Rather, the pianist's penchant for taking it to the limit gives each piece a different perspective while maintaining a kinship with Verheyen's multifaceted attack. The rhythm section and Carrothers have a history of their own, having worked together on Carrothers' I Love Paris (Pirouet, 2005), and this familiarity gives Starbound extra texture. Thys and Pallemaerts' bare-bones opening to "Lamenting" makes Carrothers' single chord ring a little louder, expertly setting the tone for Verheyen's melancholy long-form piece.

On "Lamenting," Verheyen moves to tenor sax for the only time on Starbound, adding weight to the eleven-minute exploration. Every other piece barely exceeds the five-minute mark; surprising, since someone with Verheyen's range of expression usually follows John Coltrane's legendary instinct to play until he "gets it all in." It is Verheyen's ability to find every creative possibility within a limited framework that puts Starbound over the top, and adds Verheyen to the list of reasons why jazz in the 21st century will be just fine.

On The House; Boechout; The Flight of the Eagle; Starbound; Lamenting; Roscoepaje; Waves; Long Island City; Narcis; Tree Line; I Wish I Knew.