BY CLIFFORD ALLEN
February 7, 2010
Sign in to view read count 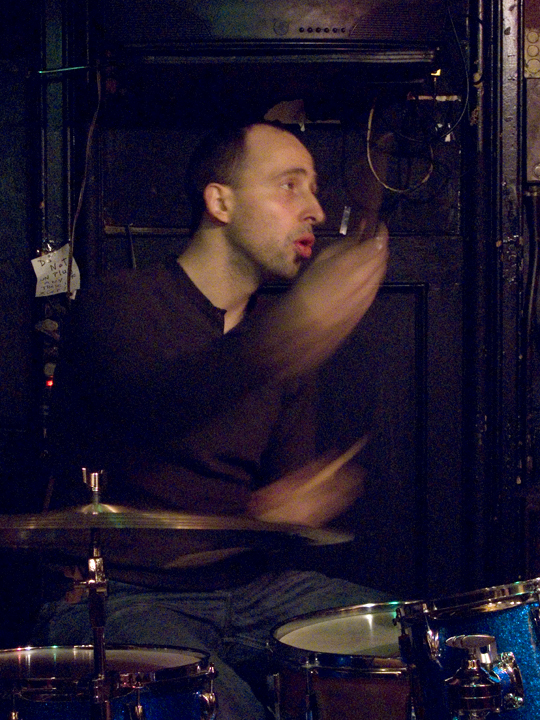 One normally thinks of the drummer-bandleader chair in this music as easily given to a mentality that embraces "more is more." Whether bombastic or just plain full, drummers' bands often focus on mass, rhythm and time. In the post-free arena, leaders like Gerry Hemingway, John Hollenbeck and Harris Eisenstadt have learned not only that every instrument can be a drum, but that the drum can be every instrument and that the drummer's role in creative music is as guide, follower, accent and architect.

Eisenstadt was born in Toronto in 1975 and though the drums were early on a part of his life (his dad was an amateur rock drummer), his main interest as a teenager was athletics. "As a five-year-old listening to my dad playing along to cassettes in the basement, I thought that this was what I wanted to do. I started with snare drum and I became a classical percussionist in junior high school. I went to Maine to play baseball at Colby College, quit that and played in a rock band doing gigs around the East Coast. That's what I did throughout my entire undergrad until 1998 and after hearing Tony Williams and Elvin Jones, I began distancing myself from rock music."

In 1999, Eisenstadt was "at the right place at the right time" and met two key people who would help further his work: Adam Rudolph and Wadada Leo Smith. Through Rudolph, "I learned that Leo Smith had set up a program at CalArts and, as it was in its infancy, Leo was able to set up scholarship money and I ended up getting a two-year tuition waiver." Eisenstadt stayed in Southern California until moving back to New York in 2006, but his experiences there were extremely influential to his concept. "I think that the greatest asset from Leo Smith as a composition teacher [from 1999-2001] was the moment when I brought him material every week that he'd chop up and say 'okay, here's what you've got left.' He had an incredible knack for stripping away what's unnecessary in his own and others' work and what is left is a polished diamond."

Eisenstadt was also fortunate to have the experience of spending significant time exploring drum culture in West Africa. "Adam Rudolph introduced me to Foday Musa Suso, a kora player. In Gambia, I stayed with him and his family and he organized traditional drumming teachers for me. I showed up at the airport in Banjul in the middle of December 2002 and the next day I was taken to the drummers' compound and every day for the next two months I studied traditional drumming. I went to all the traditional events that they played for—weddings, baby namings, life cycle changes, manhood and womanhood training and things like that." For six weeks in the spring of 2007, Eisenstadt went to Senegal on a grant, ostensibly to teach film music though "it paid my ticket and living expenses and I had enough money left over to study traditional Senegalese drumming. I spent my time shuttling between my teachers' compound and going to hear Mbalax, which is the modern Senegalese music you hear in nightclubs."

Eisenstadt has dedicated two records to the experience of studying in parts of Africa—Jalolu (CIMP, 2003) and Guewel (Clean Feed, 2008). The latter is a combination of very particulate arrangements of Mbalax songs inside structures based on Sabar rhythms. Sputtering, split-toned trumpets carry the high, while the acute skim of Eisenstadt's cymbals and Mark Taylor's French horn take up the middle range. Any thickness is obtained through sections of closely-valued hues and the added bonus of baritone saxophone (there is no bass, nor a chordal instrument).

Though busy with an extraordinary number of projects, not to mention a young family, two working ensembles are the nonet Woodblock Prints and the quintet Canada Day, which released its self-titled disc on Clean Feed late in 2009. Woodblock Prints is the third in a series of recordings for midsized ensemble (Fight or Flight, Newsonic, 2002 and The All-Seeing Eye + Octets, Poo-Bah, 2006) that draws on jazz as well as chamber music influences in both compositional approach and instrumentation. As with any of his projects, Eisenstadt gives Canada Day a clear definition. "If there's any kind of archetype for that group, it would be my love letter to the Miles quintet filtered through a '60s Blue Note thing with vibraphone replacing piano. It's not a large group and not a small group; it has a perfect combination of sparseness and richness in terms of orchestration.

"The music of Canada Day is based on forms—even if they're very open, they're still songs. The band lineup was solidified on July 1, 2007, which is Canada Day. It just seemed like a good name and it was appropriately titled. Canada is a big part of who I am. It's where I grew up. The record is all about dedication—that's important in how I title my work." With regular collaborators in trumpeter Nate Wooley and vibraphonist Chris Dingman, the group also features Norwegian-born bassist Eivind Opsvik and tenor man Matt Bauder. With Bauder called in to sub for the Broadway musical Fela in February, cellist Chris Hoffman will replace him on a series of new quintet pieces, separating the lineup from any Wayne Shorter/Joe Chambers outfit of yore.

"I spent a lot of my decade as a bandleader-composer taking Wadada Leo Smith's advice. He said 'if you're going to get something together, think about unusual instrumentation and sonorities and think about challenging yourself from an orchestration or arranging concept.' So a lot of my groups have been about having a somewhat unconventional instrumentation." The upset of structural complacency, coupled with an approach to writing that centers on paring down, is what gives Harris Eisenstadt's music a feel far from the expectations of a percussionist's band.