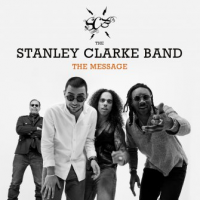 Once upon a time, he was the enfant terrible of jazz bassists, whizz-kid of Chick Corea's Return to Forever. On his latest album, The Message, at the ripe old age of 66, Stanley Clarke is very much the elder statesman, standing back on the cover pic, arms crossed, letting the youngsters grab the limelight and not giving a damn.

Open up the sleeve and there's Clarke again, besuited, sitting in a leather armchair, holding his electric bass, cool and calm, surrounded by the dudes of his band, in ripped jeans, creative hairstyles and looking as though they have attitude problems.

The opening track is a requiem for recently departed musical luminaries Al Jarreau, Tom Petty (yes, Tom Petty), Chuck Berry (yes, Chuck Berry), Larry Coryell and Darryl Brown. Clarke seemingly wants you to know he does not approve of categorization when it comes to music, man.

The main ambience of the album is spacey, courtesy, Clarke says, of L. Ron Hubbard, sci-fi writer and founder of Scientology . But there are many digressions. "Lost in a World" and "After The Cosmic Rain/Dance of the Planetary Prince," leavened with girly back-up vocals, are pure pop. More importantly, "The Message" features the leader on acoustic guitar. It's a lovely number and a relief from the spacey hokum.

But "Combat Continuum" sees Clarke switching to Orson Welles-mode as -courtesy of voice actor Steve Blum -he broadcasts news of an alien invasion. Things are looking grim for Planet Earth until Blum reveals that it was all a linguistic misunderstanding; the aliens only wanted to help us heal the planet from the ecological damage we've inflicted on it.

Meanwhile, full marks, Commander Clarke, for a masterly Bach prelude, expertly bowed. But surely we could have been spared "To Be Alive"—the seemingly inevitable rap number. The message (perhaps from an older, wiser civilisation in a galaxy far, far away) is that even a great musician comes unstuck trying to be all things to all men... and women.

And Ya Know We’re Missing You; After The Cosmic Rain/Dance Of The Planetary Prince; The Rugged Truth; Combat Continuum; The Message; Lost In A World; Alternative Facts; Bach Cello Suite 1 (Prelude); The Legend Of The Abbas And The Sacred Talisman; Enzo’s Theme; To Be Alive.