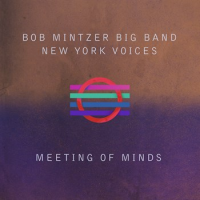 Here's an appetizing treat for fans of big bands and vocals alike, neatly wrapped in one handsome package by the stalwart Bob Mintzer Big Band and the splendid New York Voices. Together, band and voices take a fresh look at eight memorable standards from the Great American Songbook written by such master craftsmen as Cole Porter, Jerome Kern, Hoagy Carmichael, Kurt Weill, Burton Lane and others, entwining for good measure a brace of instrumentals: Vincent Youmans / Irving Caesar's buoyant "I Want to Be Happy" and Mintzer's irrepressible "Weird Blues."

For the most part, the four-member Voices blend well with the large ensemble thanks to Mintzer's resourceful charts, one by NYV's Darmon Meader ("You Go to My Head," on which Meader also scats) and another by Meader and fellow vocalist Peter Eldridge (Carmichael's plaintive "I Get Along Without You Very Well"). Although much of this ground has been plowed many times before, Mintzer and the NYV, the latest in a line of vocal groups that stretches from the Hi-Los and Four Freshmen to Lambert, Hendricks & Ross and Take Six, manage to find nourishment in almost every furrow and make the harvest well worth appreciating.

Kim Nazarian and Lauren Kinhan share the vocal lead on the sunlit opener, "Autumn Leaves," on which a solo credited to alto saxophonist Bob Sheppard is actually that of a tenor (either Mintzer or Bob Malach). Sheppard does solo with trombonist Jay Ashby on Weill / Ogden Nash's "Speak Low" and with trombonist Jeff Silverbush and uncredited bassist Jay Anderson on the closer, "I'll Remember April," while Malach solos on "Old Devil Moon." Eldridge takes the vocal lead on Porter's "I Concentrate on You" and "I Get Along Without You," which are sandwiched around "I Want to Be Happy" (eagle-eyed solos on that one courtesy of trumpeter Scott Wendholt and pianist Phil Markowitz). Mintzer solos (at least) twice, on "Weird Blues" and "The Way You Look Tonight," seizing the higher ground on each occasion. The other soloists on "Weird Blues" are Anderson and baritone Roger Rosenberg who turns in a second robust solo on "I Concentrate on You."

Mintzer's band and the NYV have recorded live performances for Pittsburgh's Manchester Craftsmen's Guild, for whose MCG Jazz label Meeting of Minds was produced. And even though this album was recorded in a studio, the impression is that it would have made a great concert. Perhaps that will happen someday. Until then, let's be grateful for what we have.

Autumn Leaves; I Concentrate on You; I Want to Be Happy; I Get Along Without You Very Well; The Way You Look Tonight; You Go to My Head; Old Devil Moon; Weird Blues; Speak Low; I’ll Remember April.