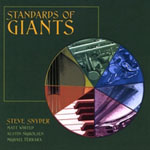 The music of legendary composers has stood the test of time, becoming standards which have been rearranged and re-recorded by many jazz artist through decades. Alto saxophonist Steve Snyder pays humble tribute to these giants of music and the immortal tunes they have scored with his debut, Standards of Giants, fashioning creative interpretations of classic pieces from artists including George Gershwin and Ira Gershwin, Jerome Kern, Oscar Hammerstein II, Leonard Bernstein and Antonio Carlos Jobim.

Based in the Los Angeles area, Snyder has firmly established himself as one of the most in-demand talents around Pasadena, California, performing with small combos as well as big bands. Snyder's love for collegiate jazz has made him a regular band member of the Caltech Jazz Band program. For this exquisite first effort as leader, Snyder records with his regular working quartet featuring pianist Matt Whited, bassist Austin Nicholsen and drummer Michael Ferrara.

Gershwin's oft-recorded "A Foggy Day" kicks off the program in boppish form, with Snyder establishing his dominance over excellent solos from Whited and Nicholsen while still managing to yield the floor to Whited for a brief moment in a more subdued performance on Jobim's "How Insensitive." Snyder and the pianist join forces in a delicate duet on Kern and Hammerstein's "All The Things You Are," as the band turns soft and cushy on Edward C. Redding's beautiful love ballad "The End Of A Love Affair," resulting in one of the best performances on the disc.

There is an exceptional and brisk read of Lennie Tristano's magical "317 East 32nd Street" capturing some of Snyder's finer moments on the alto. Richard Rodgers' familiar "Have You Met Miss Jones?" is given a heavy new percussive arrangement, transforming and painting the melody in a hard bop fashion. The album ends with a wonderful rendition of Bernstein's "Some Other Time," incorporating the music of the lesser known Isham Jones, whose 1936 melody of "There Is No Greater Love" winds up with a lively upbeat scenario including a final sparkling saxophone joust from the leader.

Snyder delivers a monster of an album with Standards Of Giants, churning out an audacious bebop musical statement of classic standards that the giants of music would, no doubt, appreciate. Tasteful and with a selective repertoire, this music will most likely guarantees a successful reception from the discerning mainstream jazz aficionado.

A Foggy Day; How Insensetive; All The Things You Are; The End Of A Love Affair; 317 East 32nd Street; Beautiful Love; Have You Met Miss Jones?; Some Other Time; There Is No Greater Love.