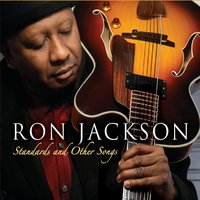 Ron Jackson may have the bluesiest seven-string guitar in New York City. He peppers a carefully deliberate swing throughout every track on Standards And Other Songs, joined by Nathan Brown on acoustic bass and Darrell Green at the drum kit. As suggested by its simple title, the album is a collection covering a broad range of music, ranging from the 1920s to the modern era, from vintage jazz standards to pop, rock, and even rap hits.

The melody is what hooks listeners when it comes to classic tunes, and Jackson wisely jump-starts most of his interpretations with the familiar. Whether it's Van Morrison's "Moon Dance," or 1980s R&B hits such as Brian McKnight's "Anytime" and Barry Eastmond's "You Are My Lady," his tight, precise picking, combined with that blues-tinged seven-string, stamps his name on these recognizable tunes.

As is perhaps the purpose of any art form, music has a way of transporting people to a place in time, evoking happiness, passion, despair, or even anger. When asked about his inspiration for this album, Ron Jackson stated that he sought to make "a recording that can bring out those emotions as a listener." Even without Bill Withers' familiar words, the trio's take on the singer's classic "Lovely Day" stands out as an example of this pursuit, easily conveying the message in its title. They also tackle the standards "Blame It On My Youth" and "The Best Thing For You Is Me," which have been interpreted by numerous jazz artists since their inception. Flugelhornist Art Farmer saw fit to record both, going so far as to title one of his finest records during the later part of his career after the former.

Keeping things fresh, the trio adds a bit of swing to Drake's 2017 rap hit "Passion Fruit." Jazz is a tough nut to crack, and for many the question of where to start appears so daunting that they are more intimidated than they are inquisitive. Says Jackson, "I want to attract folks who don't listen to jazz but know these songs." Perhaps approaches such as this will present a more accessible opening to the genre for those whose curiosity has never overcome their trepidation.

Jackson touches on genuine jazz guitar legacy with "Somewhere In The Night," which originated on Grant Green's Street Of Dreams (Blue Note, 1967). The trio remains remarkably faithful to Green's legacy here, offering a different cut of the tune (notably missing an organist) without straying very far from the source material. Brown seizes an excellent chance to solo in the album's final moments before Jackson plucks five slow, high notes, ending the trio's take on this great song with a fitting display of harmonics.

What elevates Ron Jackson past many of his contemporaries is the guitarist's cognizance of both technique and structure, especially when working within the confines of another artist's composition. Standards And Other Songs comes across as a polished album played with the unburdened air of nonchalance of an artist whose sense of self is remarkably well developed.