By Dan Bilawsky
February 21, 2013
Sign in to view read count 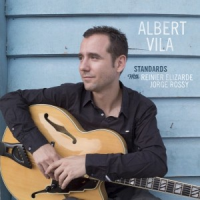 Just because a record doesn't have many surprises doesn't mean it must be predictable or prosaic, a line of thinking for which Albert Vila's Standards makes a good case. The Barcelona-based guitarist delivers a program of well-known material from the likes of compositional giant Cole Porter, saxophone legend John Coltrane, piano icon Bill Evans and other top-tier figures , hewing close to the norm without giving off a been-there-done-that vibe.

The biggest surprise here may actually be the fact that Vila went in the standards direction in the first place. When the young guitarist returned home from his musical studies in America in 2007, he began to focus on his own modern jazz material, as documented on a pair of quintet dates—Foreground Music (Fresh Sound New Talent, 2007) and Tactile (Fresh Sound New Talent, 2011). On Standards, Vila leaves this left-leaning path and takes a turn toward the center, as he trims things down to a trio and tackles the known, with some help from hometown veteran drum hero Jorge Rossy and bassist Reinier 'Negrón' Elizarde.

Vila and his trio mates don't try to reinvent the wheel as they move through this familiar material. Instead, they let quick reflexes, strong instincts and chemistry carry the day. This is most evident in quiet spaces ("Soul Eyes") and smoking places ("It's Alright With Me"), but it also becomes clear when the group simply settles into a hip groove ("Summer Night") and rides that wave in. A faster than usual take on Evans' "Very Early" adds a new wrinkle to that particular story without drastically changing the story itself, and Vila caps this set with one original statement, "One Hundred Years Of Solitude." On this number, he vividly paints a musical picture that captures the agony and ecstasy that exists in author Gabriel García Márquez's legendary book of the same name.

While the quintet format suited Vila when he charted his own path, the trio works just as well as he takes the road more traveled. Elizarde uses a flexible, less-is-more approach to playing and Rossy, who's kept a low profile since departing America and the employ of pianist Brad Mehldau, is ever-sensational; he may not be recording nearly as often these days, but he still appears to be in fine form.

Vila's first two albums were about present-to-future explorations, but Standards is something else all together; this is old world music delivered with a modern day mentality.