Home » Jazz Articles » The Season Standard: Squeeze Me Ahead of Line

The Season Standard: Squeeze Me Ahead of Line 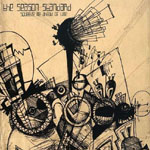 Even with the resurgence of progressive rock in the past decade—which made it possible for relatively new groups like D.F.A., Mahogany Frog, Deus ex Machina and Tuner to thrive alongside longer-standing groups like King Crimson, Yes and Univers Zero—it's rare to find a group that's at once so distinctive as to sound like none other, while clearly referencing existing sources to create its unique approach. Squeeze Me Ahead of Line, by the young German group The Season Standard, combines a number of styles expected and unexpected, to create a sound that's both unusual and consistently exciting.

Challenging writing that incorporates the complex time changes and dissonance of Mathcore, but without its head-banging metal aspect, is a fundamental; but so, too, are elements of electronica in the textures used by this intrepid quartet. Hints of funk, alongside the sound of turntables, imbue "12 Inches Nose Makes Disco," which recalls T.J. Kirk's equally fearless and electric confluence of styles. But unlike that now-defunct band's instrumental merging of the music of Thelonious Monk, James Brown and Rahsaan Roland Kirk, The Season Standard's music is all-original and vocal-driven, written by guitarist/vocalist Mathias Jähnig, guitarist/effects whiz Daniel Scherf, bassist Robert Koppisch and drummer Simon Beyer. Light on solos, The Season Standard is more about arranged instrumental passages on songs that eschew any kind of conventional form.

Oblique instrumental passages can be found throughout, with the high velocity first half of "Kaira" dissolving into a backbeat-driven but abstract second half that's effects-laden and reminiscent, to some degree, of the improvisations heard by new millennium King Crimson. While Squeeze Me Ahead of Line is clearly a group effort, Beyer stands out as a drummer of remarkable power and finesse, constantly navigating the group's knotty songs with apparent ease. Scherf's electronic bag of tricks creates an otherworldly sound that remains firmly grounded by the potent combination of Beyer and Koppisch. The middle section of "Makkk," at nearly seven minutes the second longest track on the disc, revolves around a punctuated bass/drums pattern, while Jähnig's repeated arpeggio creates a fulcrum for Scherf's ambient textures.

Produced by Tuner's Markus Reuter, it also features touch guitarist Trey Gunn (King Crimson, KTU) on "Tisa," the closest The Season Standard comes to a ballad on Squeeze Me Ahead of Line, though it ultimately turns quirkily funky during a middle section that, once again, is more about texture than thematic construction. It's also one of many features for Jähnig's chameleon-like singing. His range seems effortlessly limitless, and throughout the disc he creates a myriad of vocal sounds that seem more like a collection of different singers than one vocalist layering his vocals via overdubbing.

Idiosyncratic and undeniably a challenge to absorb, Squeeze Me Ahead of Line is, nevertheless, a remarkable debut that promises even more innovative things to come. For progressive/fusion fans looking for something that transcends merely reworking the same old territory, The Season Standard is a must-hear.

About The Season Standard