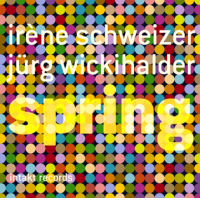 On his only previous session in duet with piano -A Feeling For Someone (Intakt, 2008) -Swiss reedman Jurg Wickihalder's indebtedness to that master of the straight horn Steve Lacy was still evident. But on Spring, in the company of the iconoclastic pianist Irene Schweizer, Wickihalder sounds entirely his own man. Both principals boast serious avant-garde credentials, Schweizer as one of the first European pianists to assimilate the lessons of Cecil Taylor, and Wickihalder more recently as a member of the Barry Guy New Orchestra. But while those attributes color their contributions, the overwhelming impression is of two sympathetic partners having a ball.

Schweizer lays down a playful rhythmic framework calling on older tropes such as ragtime and barrelhouse at times, which lends a cartoon air to proceedings. Wickihalder matches her every inch of the way, deploying a wide range of expressive tonal effects, but fully integrated into the flow rather than as technique for its own sake. One example is his mooselike wails in the background to the pianist's pretty rippling runs on "Köln," while in another he blows both soprano and tenor saxophone simultaneously on the rolling "The Road."

The sense of fun permeates not only the original compositions, which hail largely from Wickihalder's pen, but also the three joint extemporizations. In fact the overall delivery is surprisingly traditional as both musicians invoke established styles alongside their grounding in contemporary approaches. And both share a love of Monk, evidenced by the presence of two of his works as well as another standard associated with him. Even Schweizer's "Rag" displays a Monkish tinge, in both her wonderful off kilter piano solo, but also in the dashing madcap unisons.

"Ugly Beauty" receives a lush rendition as the pianist holds the line while Wickihalder indulges in breathy tenor digressions. By contrast "Trinkle Tinkle" passes quickly in a series of yelps framed by Schweizer's stride inspired piano. "Just a Gigolo" provides a lyrical leave-taking, sketched by Schweizer alone at the start before being encircled by Wickihalder's full toned soprano. At the beginning of "Blue," the reedman's folkish melody belies the improvised genesis of the piece. It heralds a passage of sublime mercurial interplay the equal of anything on this hugely enjoyable outing.