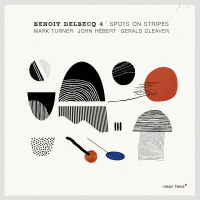 In the animal kingdom both spots and stripes contribute to the camouflage which keeps the wearer hidden from either potential predators or prey. There's something similarly disorientating about this enigmatic album from French pianist Benoit Delbecq. Renowned as someone who has taken John Cage's idea of prepared piano into the jazz sphere, Delbecq has studied with sources as varied as free jazz bassist Alan Silva, legendary post bop pianist Mal Waldron and composer Solange Ancona, a former student of Olivier Messiaen, so it should be no surprise that his work doesn't conform to genre expectations.

For the ten pieces on Spots On Stripes he's joined by a top notch American band, comprising tenor saxophonist Mark Turner, bassist John Hébert and drummer Gerald Cleaver, who partake as equals with the rhythm section getting as much time as the so-called front line. Together they create music that is fresh, sophisticated but also unsettling. Partly that's due to the way in which Turner and Delbecq's lines intentionally cut across one another. For his part, the saxophonist deploys a burnished tone, cool, collected and staying resolutely inside the forms Delbecq fashions. Even when unisons arrive, as on the mildly melancholic "Broken World," they come spiked by the leader's subtly prepared keystrokes.

Both piano and tenor often precariously perch atop sometimes smoother, sometimes jerkier bass and drums, resulting in a rhythmic ambiguity expertly handled by Hébert and Cleaver. On "Disparition Du Si," Delbecq evokes a thumb piano or gamelan orchestra in another lurching outing, while on "Dawn Sounds" his prepared keyboard motifs morph into an undulating shuffle when doubled by Cleaver. "Springs" provides the most straight ahead feel, with obvious interaction between the constituent parts, as piano echoes some of the tenor's phrasing. The final "De Staël" offers one of the more consonant resolutions, though elsewhere a reined-in poise remains the predominant characteristic, as exemplified by the languid ballad of "Dripping Stones."

If you are searching for something beyond the norm, then look no further.