BY EDWARD BLANCO
April 2, 2014
Sign in to view read count 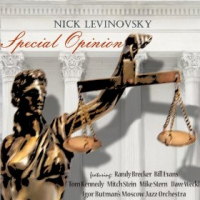 Legendary Russian pianist, composer/arranger Nick Levinovsky delivers a masterpiece of an album on Special Opinion superbly supported by friend, saxophonist Igor Butman and his Moscow Jazz Orchestra. The leader offers a non-traditional session of music presenting a taste of Funk, fusion, jazz-rock, a tinge of psychedelic and yes, even good old contemporary straight ahead stuff—all in one varied package of big band music. Though now based in New York, where he lives with wife, singer Kathy Jenkins, since 1983 Levinovsky has been a long-time member of Butman's various Russian big bands serving as the main arranger and pianist for his orchestras. As leader of his own groups, the pianist chose to record this project in New York with various special guests.

With a history of composing, arranging and performing main stream jazz for small ensembles as well as large orchestrations, Levinovsky desired to venture into new territory and does so here blending the sounds of a jazz orchestra with the stylistic approach of a rock band resulting in one exciting session of music. The ten originals start off with the title track where Mike Stern's electric guitar solos inject an element of the psychedelic on a primarily fusion-side beginning, only to shift dramatically on the following "Young Beauty (Here She Is)" that lands on a more contemporary setting with solo shots from Stern, Butman and the pianist.

One of the soft spots on the disc comes on the gorgeous "Loneliness" featuring sparkling solos from Butman and guest trumpeter Randy Brecker—definitely a highlight of the album. The duo join forces once again on the boisterous Funk-styled "Procession" with drummer Dave Weckl and the band providing the funky beats and rhythms. The band goes on another fusion romp on the adventurous "Exodus," then returns to a swinging progressive number on the gyrating "Falcon Hunt" showcasing another marvelous Butman saxophone joust.

The swing continues on the jazz-rock approach to "Chick's Picks" showcasing the leader on the keyboards and mellows out on the delicious "In This World" where Levinovsky is the main feature. The band and music calm down a bit on the romantic finale "Promised Sunlight" ending a wonderful session of music that ventures on the outer edge of the jazz stratosphere. Other special guests making the date are saxophonist Bill Evans, bassist Tom Kennedy and guitarist Mitch Stein.

An audacious big band album, Special Opinion is more than special, it is a testament to Nick Levinovsky's talents as a composer, arranger and musician. Levinovsky does a bang up job in melding influences of Funk and fusion into traditional jazz orchestrations to produce a swinging sound that packs a punch, now that's one Special Opinion worth hearing.