By JACK BOWERS
November 7, 2005
Sign in to view read count 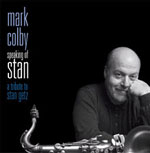 Mark Colby, who may be the finest tenor saxophonist you've never heard, pays tribute to a close friend on Speaking of Stan—a friend who happened to be one of the most renowned masters of the tenor who ever lived, the incomparable Stan Getz. Colby and Getz first met in 1963, when Mark was fourteen years old and Stan was performing in North Miami Beach, Florida, and they quickly became buddies. "We spent time playing our horns, talking, playing tennis, going to the Otto Link factory in Pompano Beach or to Frank Wells in Chicago in quest of the Holy Grail (saxophone mouthpieces), Colby writes in the liner notes. Although aware of Getz's shadowy reputation, he recalls, "I never saw his darker side. In all that time we spent together, he always treated me with kindness and sincerity.

In befriending Getz, Colby was given a unique opportunity to listen to and learn from one of the greatest jazz saxophonists who ever lived. Judging from the music presented here, I am moved to avow that he learned his lessons well. While Colby doesn't play exactly like Getz, there's more than enough similarity in his sound and style to readily connect the dots. There are times when one could almost swear that he (or she) was listening to a new recording by Stan—which would be impossible, as he passed away in June 1991—but the impression soon fades as Colby's creative temperament arises to take the music in a new direction. Even so, that glorious Getz-like sound lingers in one's ears...

In putting together his tribute, Colby writes, he "decided to choose material from a variety of sources, some of which Stan had never played, but I think, would have enjoyed doing so. Mark's friends Bob Meyer and Chris Madsen composed new works ("When It Matters, "Give and Take ) and Colby wrote "What Is a Buddha? (aka "What Is This Thing Called Love? ). Engaging compositions by Benny Carter, Irving Berlin, Sergio Milhanovich, Chick Corea, Gary Burton and Gigi Gryce precede the suitable musical finale, Gordon Jenkins' plaintive "Goodbye. The album closes with Colby's interesting three-minute reminiscence, "Speaking of Stan.

The instrumentation varies as well, with a six-piece string section added on "When It Matters and "Give and Take, a fifteen-member big band backing Colby on Gryce's swinging "Blue Getz Blues. "Goodbye is a duet for Colby and pianist Jim McNeely, who is part of a quartet (with bassist Kelly Sill and drummer Joel Spencer) on Milhanovich's "Sometime Ago, Colby's "Buddha and Berlin's "How Deep Is the Ocean? A second quartet on the remaining three numbers includes vibraphonist Dick Sisto, bassist Eric Hochberg and drummer Bob Rummage.

While Stan Getz would no doubt have been greatly pleased by what his friend has produced, Speaking of Stan isn't just another "tribute album but stands securely on its own as a splendid paradigm of contemporary Jazz. In saying thanks to Getz, Mark Colby has shown again that he is one of this country's foremost tenor stylists, one whose voice, no less than Stan's, deserves to be widely heard and appreciated.

When It Matters; Only Trust Your Heart; How Deep Is the Ocean; Sometime Ago; What Is a Buddha?; Sea Journey; Out of Focus; Give and Take; Blue Getz Blues; Goodbye; Speaking of Stan. (66:31)