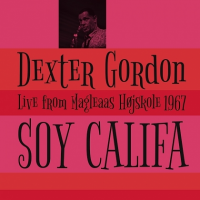 Tenor saxophone legend Dexter Gordon lived for much of the '60s and '70s in Copenhagen. Popular with the media as well as with the fans, Gordon was a regular on radio and TV. On the afternoon of August 5, 1967, he played a special concert at the Magleaas Højskole, a college for aspiring musicians. Danish TV recorded the event and a mere 47 years later three of the tunes are available on high-quality vinyl (plus a download code), courtesy of London's Gearbox Records, as Soy Califa: Live From Magleaas Højskole 1967.

Far better late than never. The tunes—a fiery, fast take on Gordon's "Soy Califa"; the slow burn of Johnny Mandel's "The Shadow Of Your Smile" and a stomping, energetic version of Sonny Stitt and Gene Ammons' "The Blues Up And Down"—all show Gordon and his compatriots in excellent form.

It might not have been too surprising if a local rhythm section had been employed for the date. Denmark was a popular destination for American jazzers at the time and the Danish TV budget was obviously pretty good, so the locals weren't required. Gordon's quartet was completed by Kenny Drew, 21-year-old Niels-Henning Orsted Pedersen and Albert Tootie Heath—a lineup fit for New York or London's finest jazz establishments, never mind an afternoon college gig.

After Gordon wails out the title of "Soy Califa" Heath is the first man to make his mark: right at the front of the mix, his cymbals driving the tune's insistent rhythm. Drew's percussive chords punctuate the rhythm while Gordon lets fly with a solo that moves from hard blowing beats to up-tempo swing. "The Shadow Of Your Smile" is cool and graceful, Gordon's tenor sound is at its smokiest and Drew's piano accompaniment perfectly complements the melody while his solo delicately captures the melancholy of the lyric.

"The Blues Up And Down"—or, as Gordon introduces it, "The Blues, Up And Down, Down And Up, East Side, West Side, All Around The Town, The Blues"—just flies. Quick, slick and hugely entertaining, this is an object lesson in the blues as positive, life-affirming, music. It's also the tune that gives Niels-Henning Ørsted Pedersen the spotlight, with a fat-toned and fluid solo that uses the full range of his bass.

Soy Califa: Live From Magleaas Højskole 1967 closes with the sound of the audience enthusiastically and deservedly applauding the quartet's performance. The lucky few in the room that afternoon no doubt heard far more than is presented here, but Gearbox has once again done a sterling job in bringing a forgotten gem to the fore.

Soy Califa; The Shadow Of Your Smile; The Blues Up And Down.