By Edward Blanco
September 6, 2016
Sign in to view read count 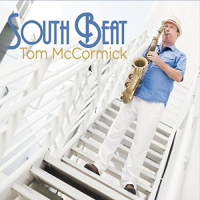 A fixture in the south Florida jazz scene for over twenty-five years, saxophonist, composer and arranger Tom McCormick presents his first album as leader on the swinging South Beat, containing a dynamic blend of Latin and Brazilian-tinged jazz with a touch of funk and a sprinkle of the smooth jazz style. A graduate of the prestigious University of Miami Frost School of Music, Dr. McCormick has shared the stage with some of the finest musicians in the world and is currently professor of saxophone at Miami Dade College where he continues to influence a new generation of musicians.

The title is take on the world famous Miami Beach's tourist mecca known as "South Beach," where the cultural melting pot found in this small part of the world, helped give birth to the high-energy life style that drive the economy, music and provides a vibrant place where both celebrities and average people alike, now call their home or favorite adult playground. The album is a reflection of the exciting Brazilian and percussive Latin sounds reverberating throughout the area and a key element in defining this part of the community.

The album offers six original tunes and classic standards from the re-imagined "My Foolish Heart," and "Alone Together," to familiar pieces from the songbooks of John Coltrane and Horace Silver—all featuring local players with guest appearances from guitarists Jonathan Kreisberg and Leo Quintero to trumpeter John Lovell. The music begins to percolate on the brief high-octane title track featuring the leader's appreciable chops on the instrument with a salty high-pitched solo matched by one from trumpeter Lovell, driving the music forwards.

The Latin sound is in full swing on the sizzling "Iridescence" with Costa Rican-born drummer Carlomagno Araya and percussionist Edwin Bonilla delivering the beat on this piece. The sounds of Brasil come out in high gear on the gorgeous original "User Friendly" while Coltrane's immortal "Naima" and Silver's classic "Barbara," both receive new arrangements making these warn-out standards sound almost anew. The same may also be said of the Victor Young/ Ned Washington standard "My Foolish Heart" that becomes a feature for McCormick's soft-sounding tenor as he beautifully delivers the tender moments of the disc.

The last two originals, "Blue Cha" and "Feel The Spirit" provide more of the Latin flavor with the latter, taking on a funkier texture before the session ends on an unusual rendition of the time-honored standard "Alone Together," which the saxophonist rearranges into a swinging Latin jazz number that works perfectly here. Delivering the swinging sounds of Latin, Brazilian and funk-infused music, South Beat is one amazing album from unheralded saxophonist Tom McCormick. The music is aggressive, enthralling and full of energy, a breakout musical statement sure to move some shoulders and hips on South Beach and beyond.