BY JACK BOWERS
September 6, 2016
Sign in to view read count 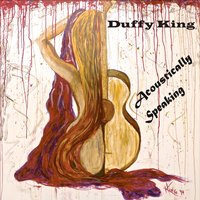 On the inner jacket to Acoustically Speaking, Duffy King's second CD as a leader, the reader is informed that the Detroit-based maestro plays acoustic and six-string guitars (plural). While that is presumably true (all guitars sound basically alike to some untrained ears), there's no doubt that King plays all of them quite well, as should be expected from a sovereign. When not swapping guitars, King composes, and does that quite well too; he wrote or co-wrote each of the album's eight selections, unveiling a special knack for designing handsome melodies and tantalizing rhythms.

Group size and instrumentation vary from track to track, with King playing alone (with electronic help) on the erratic "My Loopy Brain" (which ends, quite curiously, in mid-note) and "Mystic Road," on which he also dispenses a vociferous and largely incoherent background vocal. Bassist Felix Sainz appears on three tracks, percussionist Perry Senn and drummer Rob Emanuel on two. King and guitarist Bill Dutcher duet on the lyrical "Sophie's Sonata," which they co-wrote, while bassist Roger Noonan and drummer (and co-writer) Emanuel make it a trio on "Black Onyx." King opens with the charming "Cancion para mi Karen" (Song for my Karen), on which wife Karen King plays castanets and special guest Adam Ben Ezra adds double bass and percussion. Speaking of bass, the aptly named Joe Bass plucks away on the second track, King's propulsive "Perfect Day."

The high-octane "Danza del Sol" opens with a riff reminiscent of Buddy Rich's "Away We Go" before King takes charge with more of his six-string sorcery, and the session ends with King's "Samba del Sonoran," on which he, Sainz and Penn set a sprightly course and stay with it until dropping anchor. Even though the temperature seldom dips below steamy, there's a lot to like on Acoustically Speaking, thanks for the most part to King's mastery of his guitars (plural). If there's a downside, it lies in the album's slender forty-one-minute running time.