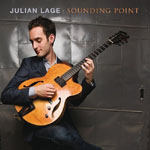 Despite being just 21, Julian Lage has clocked up some impressive credentials. The guitarist has worked with vibraphonist Gary Burton's recent quintet, appearing on Generations (Concord, 2004) and Next Generation (Concord, 2005); appeared with another jazz wunderkind, Taylor Eigsti, on the pianist's Lucky To Be Me (Concord, 2006) and Let It Come To You (Concord, 2008); and collaborated with progressive bluegrass mandolinist David Grisman on Dawg Duos (Acoustic Disc, 1999). As impressive as these works are, none are adequate preparation for the maturity of his debut as a leader, Sounding Point.

With an uncanny ability to perform to perfection in virtually any context, Lage was an ideal student for the mentoring Burton. Sounding Point's opener, "Clarity," first appeared on Next Generation, but played here by Lage's unconventional core group—saxophonist Ben Roseth, cellist Aristides Rivcas, bassist Jorge Roeder and percussionist Tupac Mantilla—it sets an expansive stage for this collection of ten originals and three covers that defy easy categorization. Pushing and pulling at already elastic boundaries, Lage creates a sound undeniably of the jazz sphere, but with a modernistic and well-conceived bent that's all the more surprising, given his tender age.

Still, assessing the album based on age—to say "what a terrific album for someone so young"—diminishes its strength and significance. With a résumé even more impressive than his recorded work to date, including Indian and classical studies and a performing career that began in blues clubs at the age of six, Sounding Point bears hints of the guitarist's many stylistic travels, yet sounds specifically like none of them. Instead, using four musical settings—his own quintet, duets with Eigsti, a virtuosic trio with banjoist Béla Fleck and mandolinist Chris Thile, and two solo acoustic guitar tracks that recall Ralph Towner in spirit, if not in style—Sounding Point is an eclectic album rife with vivid writing, imaginative playing and a seamless blend as challenging as it is listenable.

On electric, Lage's most striking reference point is Jim Hall, with a tone that blends deep hollowbody warmth with the attack of its acoustic properties. He's equally creative in the way he builds his solos, his lengthy turn on the classically informed but gently propulsive "All Purpose Beginning" is a stunning combination of controlled abandon and sophisticated harmonic ideation. The three trio tracks with Fleck and Thile—all collective compositions—manage a unique collision of contemporary classicism, nuanced Americana and bluesy jazz- centricities. With Eigsti, "Tour One" explores the oblique, while Miles Davis' "All Blues" demonstrates both players' mainstream chops.

With so many emerging artists releasing albums before they're ready, debuts like Sounding Point come along all too rarely. With a fully-formed voice that transcends yet incorporates his multifaceted stylistic interests, Lage's impressive debut points to a giant in the making. Most artists his age are described in terms of promise; with Sounding Point, Lage bypasses promise and goes straight to delivery.