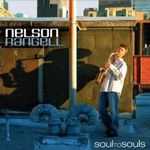 If you've never heard saxophonist Nelson Rangell, you may find Soul To Souls a pleasant step beyond typical smooth radio fodder. Listeners familiar with his work will find it, for better or worse, a return to safety.

Rangell put out unpolished fusion albums with scattered moments of innovation during his early years, hit a brief peak during mid-'90s, and has since lapsed into lukewarm territory. He took a detour for the better on My American Songbook Vol. 1 (Koch, 2005), which featured chestnuts like "Billy Boy" with novel arrangements and honest-to-goodness straight-ahead soloing. But that relative daring is missing on Soul to Souls, replaced by steady beats, familiar licks, and highlighting of guest players like guitarists Chuck Loeb and Earl Klugh.

On his web site Rangell describes the album as similar to Songbook, but says "the new disc has a little more of a pop accent."

"Doing a pop recording in this day and age has a lot of challenges," he writes. "The marketplace and the mechanisms within it can be complicated and often cynical." But Soul to Souls doesn't achieve his stated goal of overcoming those challenges with an album emulating a "direct experience of playing for people." Like many improvisers, his live performances can take things to a serious next level, but the glossiness of this album mostly leaves a nagging feeling that he's playing below his potential.

Rangell's rapid-phrase solos go beyond mere lyricism, blending his classical flute training with harmonically challenging post bop, which is why they may catch the ears of first-time listeners. But those familiar with previous albums will almost certainly find themselves thinking they've heard these exact phrases before. Rangell's range of instrumentation isn't as diverse as it was on some albums; he doesn't spent much time dong the extreme upper-register alto sax exercises of years past, and there's no novelties like his strikingly clear and precise whistling.

Soul to Souls is basically a ten-song, radio-friendly album with an even mix of covers and originals co-written by Rangell. With such a lineup, a nearly seven-minute long version of Dizzy Gillespie's "A Night In Tunisia" all but demands extra attention. The first three minutes are a mood music prelude and feature a chorus somewhat diluted by smooth synths. Rangell fingers his way competently through a minute-long solo of those rapid notes without much direction or development. In a more lyrical and deliberate way, pianist Vlad Girshevich massages a pleasant but unmemorable passage against a backdrop of more synths.

The beat-driven, high-register chorus of "A New Avenger" catches the ear enough to see if anything memorable will result, but the result from Loeb and Rangell is a lot more notes that are compatible with the composition without enhancing it. Klugh's impact is similarly minimal on "Vonetta," although it's as good a piece as any to hear Rangell on flute, where he often does his most accomplished work.

Free As The Wind; City Lights; When I Saw You; Vonetta; Instrumental Theme Part 2 From One Man Dog; Mean Business; A Night In Tunisia; A New Avenger; Send One Your Love; The World View.