BY NENAD GEORGIEVSKI
April 19, 2006
Sign in to view read count 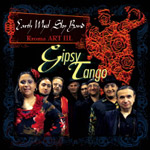 This fourth release by Earth Wheel Sky Band finds the Serbian group a step further up its music ladder. The band's first two releases worked with both contemporary and traditional arrangements, maintaining the integrity of the music from the region; the third, 21st Century, was a collection of side works and collaborative projects that leader Olah Vintze undertook with or without the rest of the band.

The Last Gypsy Tango finds the band merging gypsy music from the north of Serbia, which is more under the influence of Hungarian folk music, with brass instruments and uneven rhythms from the south. EWSB draws with ease from a myriad of other forms like flamenco, reggae and soul. Each song draws you to its heart, and keeps you there. This is not the first time that EWSB has amalgamated different traditions; the approach yielded outstanding results on the group's previous records.

The band's playing is the first thing that will strike you as you start to listen to the record. The musicians play with exuberance and each one exudes a buoyant, infectious energy. The material flows easily and is well balanced, especially with respect to the arrangements. The music ranges from the dreamy opener, "Gypsy Tango, to soulful ballads like the achingly beautiful "Rumba Janika (a standout track with its killer violin, swinging clarinet and wonderful rhythms) and folkish up-tempo tracks like "Amorroma (whose opening melody, on clarinet, is taken from Bizet's Carmen), "Ushti Rroma, "Free7/8 and "Scheherezeda. Other highlights include "ApsolutRromantic (a traditional gypsy song that became popular during the '80s, when it was "stolen by a popular singer at the time, who introduced it as his) and "Tikno Luludi.

The band's approach on this record could perhaps be characterized as ethnic jazz, but the roots and fronds of the tradition make it irresistible. This is indispensable stuff from giants of gypsy music. Highly recommended.