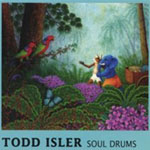 File under: drum/percussion showcase. Drummer/percussionist Todd Isler, on his sophomore effort, provides a diverting album that will perk up the ears of any student of rhythm and world-beat. To provide further variety, Isler's percussion solo tracks are spaced between ensemble tracks throughout the album.

Soul Drums opens with a very mainstream "Kalalau Trail," a remembrance of Kauai (Hawaii)'s ."..treacherous but gorgeous trail..." which, verifies Isler's description. It is also, a feature for Hawaiian tenor saxophonist Allen Won.

The influence of African, Brazilian and Indian percussion begins with "Waves of Kalalau," featuring Isler's frame drum and continues on "Tiptoe," with Billy Drewes taking over on tenor sax. "Just Wait" features the South Indian Kanjira, which is also featured on "The Rains." Isler uses a two-chambered udu drum that he co-invented with percussionist Jamey Haddad on "Hadgini Journey," and Brazil is given an airing via "Baiao Todd," "Olinda" and a version of Stevie Wonder's "Bird of Beauty," which also incorporates the partido alto, as well as funk and samba.

The album closes with a cover of Joe Zawinul's "Badia" an Isler duet with guitarist David Phelps who plays in a rock style. With the exception of the Wonder and Zawinul tunes, all others are originals either written or co-written by Isler.