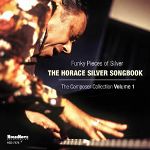 The John Coltrane and Thelonious Monk Quartet earth-shaker At Carnegie Hall (Blue Note, 2005) set a pretty high watermark, and other historical recordings inevitably have a lot to live up to. Pianist Horace Silver's Live at Newport '58 is very good, and is certainly historically significant, but is it Carnegie Hall good? Perhaps not quite.

Silver had brought a new group to headline the Sunday afternoon session at the Newport Jazz Festival. That group would turn out to be four-fifths of the quintessential Horace Silver Quintet: trumpeter Blue Mitchell was two months away from joining the band when Silver counted off the opening number "Tippin.'" That cut is the second piece of history on Newport '58, since the up-tempo piece's previous claim to fame was its existence as an obscure B-side on a Blue Note 45.

Given the relative inexperience of his new group, you'd think Silver would choose more established material for a venue as exalted as Newport. Instead, Silver went with new material for the first half of the 47-minute set: "Tippin'" was followed by "The Outlaw," a cut off Silver's 1958 album Further Explorations by the Horace Silver Quintet. Art Farmer and Clifford Jordan held the front line on that date, but Silver's new players—tenor saxophonist Junior Cook, trumpeter Louis Smith, bassist Gene Taylor and drummer Louis Hayes—handle the material like they'd always owned it.

Silver gives his front line plenty of room to work, ceding the first two solos to them on every track. If you didn't know Mitchell was going to join up by the end of that year, you wouldn't even miss him; that's how well Smith does on this gig. His trumpet work is high, wide and handsome with an assertiveness that never wanes, even on a relatively down-tempo piece like "Señor Blues." Cook is just as purposeful, and the teamwork he and Smith demonstrate on the complex "The Outlaw" sounds like the product of a partnership that's existed for years, not days. Unfortunately, Cook didn't bring his "A" game with him, as his tenor falls flat on more than one occasion.

The rhythm section gets the worst of the recording, in that Hayes' crackling drums are way up front in the mix while Taylor's bass is nearly swamped; you don't really hear Taylor until the front line drops out and leaves Silver alone with the rhythm section. That said, these trio moments are the best parts of Newport '58 because the listener gets a real sense of Silver's elegant piano. Whether he's taking it to the max on "Cool Eyes" or keeping it subtle on "Señor," Silver's solos are wonderfully soulful while maintaining a laser-like precision that consistently amazes.

Excluding the sample of Newport emcee Willis Conover's trademark patter, there are only four tracks on this disc. Paris Blues (Pablo, 2002) gives you a more comprehensive look at the Silver Quintet in concert; it also has Mitchell in his rightful place on the front line. Still, Newport '58 is a glimpse of what was to come, and will be a point of interest for Horace Silver aficionados everywhere.