Guillermo E. Brown: Soul At The Hands Of The Machine 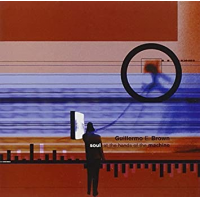 In every sense a collage, Guillermo E. Brown's debut as a leader spans an insane variety of genres and manages to stitch them together into a seamless whole. At the root, of course, is the beat. Brown's drumming rolls through funk, jazz, hip-hop, and Latin rhythms with ease, and the addition of electronic beats and textures thickens up the soup. Layer upon layer of sounds pile on top: voices, percussion, saxophones, bass, and piano. Soul builds upon the opportunities made possible by electronic effects and studio production, without ever losing a sense of the human voice in the jungle.

Brown made his name as the drummer in David S. Ware's out jazz quartet, and in that context he provides an ever-shifting pattern of rhythm that supports and propels the rest of Ware's group through their voyages in outer sound. But when he assumes a leadership position, Brown indulges his multifarious tastes in music without implying any boundaries whatsoever. This record is a document of an open mind exploring sonic combinations with abandon. The saxophone lead on "Manganese," for example, assumes a bold modal jazz feel while the rest of the band charge through vamps and polyrhythmic textures that draw upon Brown's experience with Latin music and free jazz. One tune later, "basso.ritmo.luz" achieves what few musicians have been able to pull off: a true fusion between electronica and jazz. A mysterious web of sound and texture reverberates through sparse chords and an actively pulsating bass line. And then the group moves on. On "das Funken," a cinematic passage preludes the introduction of a fresh funk groove and wah guitar, digging deep into a groove not too far from what Miles Davis dug on his epic 1972 funkathon On the Corner. But even at moments like this, the interweaving of saxophone and flute imparts an otherworldly glow.

Two things stand out on Soul. First, Brown may be keenly aware of the sounds available from this combination of electronic and acoustic instruments, but he assiduously avoids cliché. Unlike many postmodernists, he insists on endowing musical references with their own personal character. Second, absolutely nothing here is predictable. While the disc may be a sonic feast if you pay attention, you're likely to be regularly surprised and distracted if you try to play it as background music. Soul may be playful, but this is most definitely serious music. If you're willing to approach Guillermo E. Brown with an open mind, you'll find this music a joyous fusion of styles both familiar and beyond imagination.

if we can ever find a way; gimme time tiempo; Manganese; basso.ritmo.luz; das Funken; electro.prayer.1; modular/rootstrata; AnikuRock; more & more; inside the purple box; Outside Looking In; gnizama (for troublesome trans-atlantic boats).