Sophisticated Giant: The Life and Legacy of Dexter Gordon 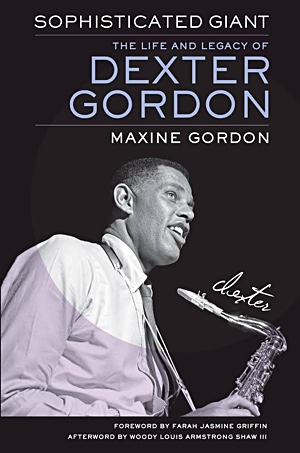 Dexter Gordon's place among those who created and performed some of the most influential music of the 1940s, 1950 and the early 1960s, when so many giants walked the earth, is indisputable. He was one of those giants, physically and otherwise.

That stature comes to sharp focus in a new biography by his widow, Maxine Gordon, Sophisticated Giant: The Life and Legacy of Dexter Gordon [University of California Press]. The author is not just a Dexter insider, but a thoroughly qualified researcher, particularly as it applies to music. She wasn't just Long Tall Dexter's wife, she was also married to trumpeter Wood Shaw and was a tour manager elbows deep in the music business. [When she writes of the questionable tactics of the shakers and movers in the industry, she know of which she speaks.]

The sharp portrayal, with in-depth observations and stories, is also important because Dexter himself is a kind of co-author. He was planning an autobiography and wrote things down with pen and paper over time. As his health waned, and finishing the memoir was not possible, he asked Maxine to continue; to see the project to fruition. This she did in laudable fashion.

Admittedly, there were things the saxophonist did not want to talk about and while he was alive DID not talk about. Particularly a good chunk of the '50s, when drug addition troubled him and so many others. Arrests and incarcerations were part of that period. But Maxine Gordon, properly, opens the curtain on those blemishes. Not for prurient interests. There is no car wreck to see. Showing hard times makes the eventual triumph more resounding. Rising after one falls is heroic. It's also part of the complete story.

The summation of Dexter the man and Dexter the musician is laid out over 20 chapters. Maxine explains it is not a typical bio, birth-to-grave. It's a travelogue of sorts, filled with facts, not just observations. But the stories are forthright, some of them right from Dexter's pen. The final painting is that of a man with not only supreme musical talent, but a curious and deep thinker, and man who cared about the plight of people, a man of kindness and of joy. So much of that joy was spread to people when he put the mouthpiece between his lips and began to blow.

It begins with a thorough history of Gordon's family, gong back to his grandparents, and the family's eventual settlement in Los Angeles, where Dexter grew up and first got into music, alongside talented peers, some of whom also had noted careers. Gordon got out of LA with the Lionel Hampton band which took him around the country, educating him as musician and person. It's also where he got to see more of his heroes. Among the cool stories is 1943 when, in New York with Hampton, he stopped by the Apollo and sat in on a jam where Lester Young and Ben Webster were also involved. He compared it to going three rounds with boxer Kid Galivan, and opines, "I think there is an affinity between boxers and musicians. Both professions take plenty of heart and only a few become legends. Both take study, practice, dedication and courage."

That anecdote early in the book could be a subtitle. Dexter had all those qualities and the thread runs through his life story. He became that legend through those qualities, not through mythology.

Revealed is Gordon's love for Louis Armstrong and his long association of the future bopper with the icon of swing music. Naturally, the book follows all his important encounters, like his days with the Billy Eckstine band, his contract with Savoy records and the difficulties he, and all jazz musicians, faced at the hands of these companies. There are snapshots through out—great tenor battles though the years with the likes of Wardell Gray, and affirmation from Jimmy Heath that in fact he and John Coltrane, among so many others, idolized Gordon.

From his time in prison, we learn that Gordon, being the deep thinker that he was, took on the view that ultimately it made him a better person. Maxine points out he always thought his story would have a happy endng, even if interrupted by transgressions or trouble laid at his feet by others.

His years in Europe portray a man universally respected on that continent for his great music. He manged to find top musicians to play with, either expatriate Americans like himself, or the young monstrous bassist Niels-Henning Orsted Pedersen from Denmark.

Of particular interest is his well-known role in the 1986 film Round Midnight, directed by Bertrand Tavernier, for which Gordon received an Academy Award nomination. For those who saw the film, based in part on the lives of Lester Young and Bud Powell when they lived in Europe, it is enlightening to know the breadth and depth of the saxman's involvement. First, he had to build up his chops just to be strong enough for the paying parts [his live performances had tapered off at that time]. He also got involved in the story and dialog, recommending changes when he thought the script was making character Dale Turner silly, trite or simply not a representation of what a jazz man would really say and do. Dexter was a man to be taken seriously and Tavernier did just that, listening to Gordon and heeding advice. Dexter was into films and was not ill equipped in that venture.

Musicians he gathered for the film were, in many cases, people he had enjoyed playing with over the years who now had a chance to appear on the scene, like drummer Billy Higgins, vibraphonist Bobby Hutcherson and bassist Pierre Michelot. The lead-up and attending the Academy Awards night is touching and at times comical, including drinking in a bar with the other Best Actor nominees. All but Paul Newman were there. They were quaffing because they figured Newman would win, which he did.

The book is a good read and its thoroughness can almost go unnoticed until one might pause to reflect. Dexter's life, as he anticipated, did come to a happy ending, particularly upon his return to the U.S. And the great music he made from that point on, captured on Columbia records. Accolades came, as well. They will continue to. A nice end is an Afterward, written by Woody Louis Armstrong Shaw II, son of Dexter's friend and musical mate Woody Shaw and Maxine Gordon. Naturally, Dexter helped raise him and the tribute is a nice testament to the man with that hot tenor horn.