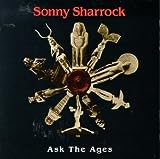 Although Charlie Christian introduced the electric guitar to jazz in 1939, everyone playing the instrument in jazz kept his sound and ideas embodied in their playing until the late '60s. During this period the instrument became a vital part of the emerging fusion scene. Some of the electric guitar's most memorable work has come from a handful of rock guitarists who embraced jazz, like Frank Zappa on Hot Rats or Jeff Beck on Blow by Blow. But overall, some of the instrument's finest modern sounds flowed from the fingertips of jazzier players like John McLaughlin. Though each of these artists has had an absolute and immeasurable influence on jazz, the one man who really reinvented the jazz guitar from inside is a player who is barely known outside—or inside—of jazz circles: Sonny Sharrock.

Sharrock (1940-1994) is an interesting piece of the jazz puzzle. He was the first and for the longest time the only guitarist working in the area of free jazz. Though his day job in the late '60s was playing in Herbie Mann's band, his work with Pharoah Sanders, notably on Tauhid, found him really cutting loose, showing a certain genius for creating sound sheets of blistering noise with bop-styled runs. At this point in his life, Sharrock used feedback to duplicate the rips from the brass men he played with, before Jimi Hendrix and Pete Townsend would make it fashionable in the mainstream. His early records as a leader are solid, but he really came together in the '80s when, surprisingly enough the players who were influenced by him began to be noticed in the downtown New York scene. The unaccompanied Guitar (1986) and Seize the Rainbow (1987) were shocking in their unabashed genius, but his last record, Ask the Ages, is unquestionably the greatest achievement of his entire career.

Teaming back up with Sanders, Sharrock does not waste a single note on this record. He summons both his forward sonic attack and a beautifully melodic side with equal ease. Sonny also leads this band with his best compositions ever laid to wax. Working within a variety of time signatures and dropping in riffs that work against the grain of the melody, he maintains a high interest level. Certainly the recording represents a change from what even the most intricate jazz players of the time were doing. He takes nods from Coltrane's modal work and provides a solid and eclectic base.

From the opening run in "Promises Kept," Sharrock builds a fusion-esque groove with drummer Elvin Jones and bassist Charnett Moffett, allowing Sanders to churn out some his strongest playing since the '70s. With the tracks "Little rock" and "As We Used to Sing," the record can almost be seen as a single composition broken into six parts in much the same way as Miles Davis' early-'70s work. These two tracks are the centerpiece and are taken from the same single jam. This makes the whole of the record just as interesting as the individuality of each track. Though they are each unique compositions, after playing the disc through a few times it seems evident that there is a central concept being executed.

One of the highlights on this record is the return of Pharoah Sanders to some of his finest playing in years. Whatever the reason for the renewed enthusiasm, it shows itself throughout. Not only is his playing hot, but there is a true spiritual vibe to his choice of notes and riffs, recalling his classic Impulse work. Sanders' freedom to work outside the perimeter while building up bulk mass fits perfect into the individuality of each tune. The reunion of these two free greats seems to have reenergized their sound, making this recording feel that much more special, especially since it was the last one before Sharrock's death.

The other huge input on this record comes from the man behind the scenes of Sharrock's rise in popularity from the mid-'80s onward: Bill Laswell. Laswell's work on multi-tracking helps to add depth and groove the CD. Laswell is one of the most eclectic voices in music. From the underground noise blasts of his work with Sharrock in Last Exit to his remixes of early rap and dub, he has turned his hand to any number of genres and build a solid vibe. His playing and producing plays as much a role of the final output as Teo Macero's work did with Bitches Brew.

Though Ask the Ages may not be the easiest for jazz guitar fans to get into at first, it is extremely rewarding. Throughout the record Sharrock utilizes a variety of sounds and pushes the limits of his playing. The band certainly picks on the vibe and rips the guts the free jazz's ideas and sound while simultaneously pulling right toward Sharrock's jazz roots.

Spending time in the Sharrock world will certainly help newer jazz fans to understand where players like Bill Frisell, Derek Bailey, and Fred Frith are coming from. Sharrock is without a doubt the brightest beacon of early avant-garde jazz guitar. Running across his records is a schematic that NY downtown guitarists are still using. Certainly the experimental forays of records by Frisell and Frith carry on ideology that Sharrock brought using the guitar as the weapon of means. While most players were spending their woodshedding time learning Wes Montgomery licks, Sonny Sharrock was opening up the jazz guitar to a new world of endless possibility.