Marialy Pacheco: Songs That I Love

By IAN PATTERSON
January 13, 2012
Sign in to view read count 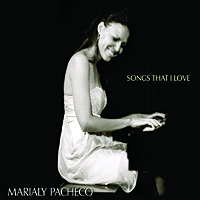 For her third solo album, and first for Australian label Pinnacles Music, Cuban pianist Marialy Pacheco follows her truest muse—the songs closest to her heart. It follows that the eight tracks—Cuban compositions, two by Jerome Kern, two originals, and one by Paul Simon—were recorded with minimum fuss in just three hours. Consequently, these performances have a refreshingly vital immediacy, and an exciting improvisational vein, which begs the question why more artists don't take this approach in the studio. Pacheco's strong rhythmic and melodic sense is keenly felt throughout, as is her lyrical, playful and adventurous spirit.

The set begins gracefully, with trumpeter Mario Bauza's "Mambo Inn." For many Cubans this track was popularized by pianist Frank Emilio Flynn, a pioneer in fusing Cuban bolero with jazz in the 1940s and an apparent influence on Pacheco. Her disarmingly simple left-hand motifs exude the island's persuasive rhythms yet, in truth, it would be possible to dance to the rhythms of either hand. Pacheco's unswerving melodic flow accelerates with a couple of dazzling descending runs but is otherwise faithful to the spirit of the original.

Classically trained, Pacheco has the technique to give full rein to her improvisational temperament, beautifully illustrated on Simon's "The Sound of Silence." Pacheco's exploration of the melody's inner pathways builds slowly, gaining in potency during improvisational runs which share pianist Keith Jarrett's rhapsodic, tumbling flow. The Latin-flavored original "Sunshine State"—named after her adopted Queensland—raises the improvisational bar a notch, as Pacheco enjoys long, rapid right-hand runs over deep bass ostinatos. The other original, "Bremen," reveals great delicacy of touch. A blue, nostalgic tone is maintained by the gentlest of left hand motifs and remains undisturbed, even when Pacheco stretches out. This quietly beguiling mood piece is reminiscent of pianist Bill Evans at his most introspective.

"Danza Para 4" is Pacheco's homage to Cuban pianist Emiliano Salvador, whose flame shone all too briefly, dying as he did in 1992 at the age of 41. Salvador emerged in the late 1960s and has provided inspiration for more than one generation of Cuban musician, notably pianist Chucho Valdes, multi-instrumentalist Bobby Carcases and clarinetist Paquito D'Rivera. Pacheco's up-tempo interpretation, full of fire, also has a waltzing buoyancy which underlines her knack of seducing emotionally whilst dazzling technically. Pacheco achieves the same effect on Cuban guitarist Guillermo Castillo's delightful "Tres Lindas Cubanas," an old gem dusted down and given new shine.

Jerome Kern's "The Song is for You" and "The Way you look Tonight" show Pacheco's ease in another idiom, as she stylishly embraces The Great American Songbook. Less rhythmically striking than the Cuban numbers, the melodies running through the veins of these tunes are, nevertheless, grist to Pacheco's mill, and she spins subtly arresting improvisations along the way.

A few more volumes like Songs That I Love wouldn't go amiss, but given the strength of her own compositions, the highly talented Pacheco seems poised for an even bolder solo statement, one which will really make her name.

Mambo Inn; The Sound of Silence; The Sunshine State; Bremen; Danza Para 4; The Song is You; Tres Lindas Cubanas; The Way you look Tonight.