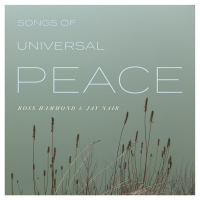 If we all practiced a bit if mettā, there would be no war. The Buddha told us this, so did Gandhi, Mother Teresa and John and Alice Coltrane. All these folks realized the practice of mettā—loving kindness, or the wish that all sentient beings be happy and free from suffering—is the path to universal peace. The wish is simple, the practice much harder. The hope that others be happy and free from suffering must also extend to those you don't know and even to those you don't like. Yikes!

Never fear. Along comes a proper tool for mettā in the form of Songs Of Universal Peace by American improvising guitarist Ross Hammond and the Indian devotional-music singer Jay Nair. The pair find common ground at the intersection of the seemingly disparate sounds of Appalachian folk and Indian ragas to create an amalgam worth meditating over. Nair was born in India and trained in Indian classical music, and moved to the US in 2001. He sings 5,000-year-old Sanskrit mantras over the improvised music of Hammond. Hammond's guitar work draws from his Appalachian roots in Kentucky, but like Bill Frisell, he doesn't draw a bright-line between folk, jazz and world music, all of which is raw material for this album.

The pair improvised six pieces here, from the roots-inflected guitar of "Be Well" and "May You Be Happy" with its repeated chants, to the wordless prayer of "Infinite Compassion" that blossoms into sacred prayer. The music, on its face, is a mismatch of disparate cultures and sounds. How do you combine American roots music with Indian ragas? Nair and Hammond do so at the crossroads. Each leans against and is supported by a mutual respect for the other's sound. This understanding is the basis for all improvised music and the reason that German free jazz saxophonist Peter Brötzmann can work with Japanese koto musician Michiyo Yagi. Nair and Hammond provide a similar blueprint for cooperation, and their songs are a breeding ground for mettā.