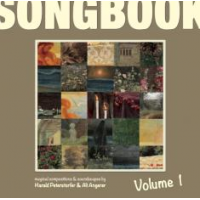 Songbook is a stunning blend of fusion, ethnic folk, and jazz, going for a moody, textural, and lush vibe. These recordings are haunting and beautifully arranged, aiming for a diverse and elegant approach. The production is particularly tasteful: this is the sound of two people sitting together and performing, adding a really organic feel to the listening experience.

Ali Angerer strikes for the warmth and depth of his tuba tones, while Harald Peterstorfer can make even the most complex guitar phrasing deceptively simple. For these two talented gentlemen, it was never about a show off of technical skills. Although these tunes certainly are a testament to the world-class ability of these performers, the songs featured on this release boast a really emotional approach to musicianship, striking for its beautiful tones and heartfelt melodies.

There is something absolutely magical in a record that has such a small set of instruments, yet manages to reach so far deep into a listener's mind and heart.

Blissful; Castle In The Snow; Waiting For; 1301 Miles; Moon On A Forbidden Sky; Nightline; Ellum; Unbelieveable; Can You See The Moon; Askim; Traumline; Anatolia; La View; At First Light.