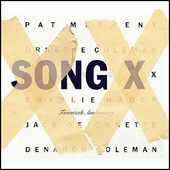 Back in 1985 when Pat Metheny released Song X, his collaboration with free jazz/harmolodics progenitor Ornette Coleman, it came as a big shock to fans familiar with the more overt melodicism of the Pat Metheny Group. Sure, there'd been hints that Metheny's seemingly insatiable appetite to experience all things musical also included excursions into free territory, including albums like 80/81, Offramp, and Rejoicing. But in those cases the free tracks were one-offs—and surrounded by his more lyrical material, which was considerably easier to swallow.

But from the opening track of Song X, and even more so the thirteen-minute seemingly anarchistic sonic assault of "Endangered Species," Metheny presented an entirely different side that, to some extent, continues to polarize his fans to this day. Still, like it or hate it, Song X was a significant record in many ways. It brought to the fore Metheny's already clear love of Coleman's music; it showed that Metheny, despite people's best efforts, refused to be pigeonholed; and it set a precedent for even more challenging future recordings, including his collaboration with Derek Bailey, Sign of Four, and his solo noise improv album, Zero Tolerance for Silence.

Twenty years later Metheny has created a rare opportunity for himself: to go back to a watershed recording and remaster and remix it, since the original project was done in a hurry, from recording to mastering. And while Metheny had to cut a lot of material from the initial release to meet the time restrictions of vinyl—still the most popular medium of the time—he's been able to put much of that material back into Song X: Twentieth Anniversary, stretching the new release to nearly 67 minutes.

In an unconventional step, rather than presenting the original album with the added tracks appended as bonuses, Metheny's placed the new material at the start of the record, suggesting that this new version of Song X should be assessed as a separate entity from its twenty year-old predecessor. The surprisingly memorable melodies of new tunes like "Police People" and "The Good Life" place the more extreme tracks into new perspective; the whole album actually feels somehow more complete, more stylistically whole, and the individual pieces more clearly delineated.

Contrary to popular misconception, free music does not mean random noise, and one of the most striking features about Song X: Twentieth Anniversary is just how un-random everything is. A close listen to "Endangered Species" reveals very intentional motifs; even at their most extreme and sonically dense, the collective improvisations are incredibly focused—unfettered, yes, but manifesting an unmistakable sense of purpose.

Song X: Twentieth Anniversary may still engender controversy two decades after the original release, but some Metheniacs—having been exposed to his ever-broadening scope—should now be ready for it. And those who still think of Metheny's music as a smooth-edged pop-jazz confection will be proven just how wrong they are by this new release.