Esbjorn Svensson Trio: Somewhere Else Before 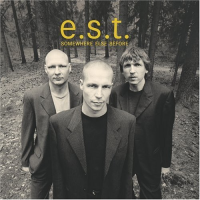 A few weeks ago, the New York Times ran a big article by Stuart Nicholson on the "new European jazz." The article spotlighted jazzers from overseas like Nils Petter Molvaer, "Magic" Malik Mezzadri, Bugge Wesseltoft, and Eivind Aarset (the article didn't mention Erik Truffaz)—artists who are blending acoustic jazz with turntables, drum-n-bass beats, and/or other club-culture elements. Of course, America has its own practitioners of this new music, but what's different about the Euros is they're fostering a scene, packing clubs full of young people who go not just to hear their stuff, but to dance to it. Here, it seems, is another of those historical cycles—jazz moving from dance hall to concert hall back to dance hall. Some would no doubt question whether the new European jazz is in fact jazz, but let's put that aside for now.

One of the new music's most successful exponents is E.S.T., or the Esbjörn Svensson Trio, led by the Swedish pianist. In August Columbia will handle the U.S. release of Somewhere Else Before, a compilation of tracks from the group's two previous European discs, From Gagarin's Point of View and Good Morning Susie Soho. It's a striking collection—more acoustic than electric, moving from picturesque, John Taylor-style piano balladry ("Somewhere Else Before," "The Chapel") to hip, agitated breakbeats ("The Wraith") in a heartbeat. At times it can get a little too poppy. ( Good Morning Susie Soho didn't climb to number 15 on the Swedish pop charts for nothing.) "Dodge the Dodo," for instance, begins with a driving, intense electronic groove; but when the band comes in there's something a bit vanilla and Hornsby-esque about the harmony.

Are Svensson and his colleagues serious jazz players, then? There's no doubt whatsoever. But while they're highly adept in the classic piano trio mold, they're also interested in pushing beyond it. At their best, like on the riotously polyrhythmic "Spam-Boo-Limbo" or the minimalist, faux-electronic "From Gagarin's Point of View," E.S.T. are indeed doing something new and vital. Somewhere Else Before, then, is a qualified success. More than anything, it ought to draw Americans' attention to some of the new jazz conceptions coming out of Europe.

Somewhere Else Before; Dodge the Dodo; From Gagarin's Point of View; The Return of Mohammed; The Face of Love; Pavanne "Thoughts of a Septuagenarian"; The Wraith; The Chapel; In the Face of Day; Spam-Boo-Limbo; Hidden Track.