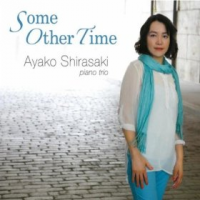 There is a certain sublime pleasure in the simplicity of the trio playing piano, bass and drums. The Ayako Shirasaki trio's approach is straightforward and straight ahead jazz at it's best. Blending both traditional and original compositions, Shirasaki is a nimble and facile pianist who knows how to swing like Bud Powell, one of her musical inspirations as well as bop with the best of 'em.

Where you listen is as important as what you listen to, and Some Other Time would sound terrific in an intimate club, a wine and cheese party or staring dreamily out of a window on a rainy day. Shirasaki majored in classical music at Tokyo National University of Fine Arts and Music, but her love of jazz brought her from her native Japan to New York City in 1997 where she earned a masters degree from Manhattan School of Music, and studied piano with Kenny Barron.

Ably abetting Shirasaki is bassist Noriko Ueda and drummer Quincy Davis, both adept and accomplished musicians. The interplay amongst the trio is dynamic, as evinced how Ueda and Davis set up a potent groove on Sonny Rollins' "Oleo," as Shirasaki dances in and out with her fingers flying across the piano. It's a delightful interpretation that showcases the strengths of all three musicians.

There is nothing showy about the trio's approach. Shirasaki, Ueda and Davis are lively, inspired and proficient players with "Long Ago and Far Away," "April In Paris" and Shirasaki's original, "3 Steps Forward" among the standout moments as well as a solo piano version of "Sophisticated Lady" that does Edward Kennedy "Duke" Ellington proud.

There isn't a false note or halfhearted effort to be found on Some Other Time in what is one of the most enjoyable and impressive albums of the year. This is an unqualified success and enthusiastically recommended.