By GLENN ASTARITA
April 6, 2013
Sign in to view read count 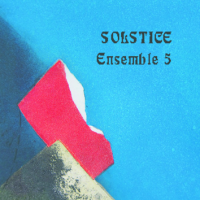 Drummer Heinz Geisser's robust discography for Leo Records implies an active mind on the loose via his firm footing in the avant spectrum. He now expands his Collective 4tet to Ensemble 5, offering a combination of youth and experience coalescing into an idea factory of sorts. No two pieces sound distinctly alike, which is not always the case with many other free-reign albums of this ilk. With a broad baseline laid out, the unit's fluctuating momentum, blustery choruses, sinuously designed improvisational jaunts, and microtonal explorations are among many descriptors or attributes, executed throughout.

"Out of a Dew Drop" is perhaps a study in investigating minimalism, where each band member takes on a specific role. Featuring Reto Staub's trickling piano notes, concise horns statements and a vast plane of musical notions, the band also merges tumultuous and chatty exchanges, morphing into a bursting free-jazz romp. And Geisser's compelling free-form drumming poses a holistic backdrop. Even when he's providing subtle asymmetrical accompaniment, he manages to devise subliminal beats that are regimented and deceptively complex. This factor adds an additional layer to the rhythmic components.

The musicians alternate between hyper-motion, stilted progressions, and circular movements, all instilled with fragmented breakouts amid the proverbial peaks and valleys. Geisser often resides on top of the pulse and serves as a catalyst and colorist. However, they turn the tide on "Stand Clear," which is a hip, loose-groove piece, shaded with a touch of pathos thanks to trombonist Robert Morgenthaler's warbling lines. And they add another dimension with reverse-engineering mechanics, moving forward. From an avant-garde perspective, Ensemble 5 embraces a great deal of fertile musical space. The artists' intuitive dialogues and willingness to transcend the norm is quite apparent from start-to-finish.

In Short; I'll Snag You; Out of a Dew Drop; Solstice; Innuendo; Stand Clear; Why Five; 4's.