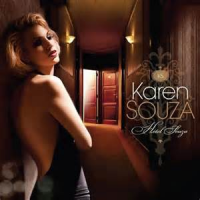 There is a 19th Century short story by author Frank Stockton entitled, The Lady, or the Tiger? The hook of that work is the teaser leave-you-hanging ending: is there a Lady or the man-eating Tiger behind the door that is selected and "opened." With Hotel Souza, her second CD, Buenos Aires-based vocalist Karen Souza leaves little to the imagination. This hotel has musical rooms of exquisite talent, beauty, elegance and intimacy.

Displaying sensuality without a cloying phoniness, Souza delivers eleven beautifully-performed and impeccably-arranged songs, backed here by some of L.A.'s "usual suspects." The result is a marvelously entertaining tour d' hote.

Souza's voice is one of elegant restraint and sensuousness. Hers is not an overpowering vocal presence, but rather, a very inviting one. She seduces deliciously with gentleness and whisper-to-the mic sultriness. That feeling is pervasive across an interesting selection of ballads, bossas (Antonio Carlos Jobim's "Dindi"), softer swing ("Delectable You," "Full Moon") and soft-rock grooves ("Night Demon"). She hits a soulful home run with a dark blue rendition of Marvin Gaye's classic, "I Heard It Through the Grapevine," recorded here with members of Gaye's original band. The Joel McNeely arrangements are slick and frame Souza well without over-dominating her. That savvy set-up allows Souza's lyric and tonal skills to dominate. Her diction, phrasing, dynamic nuance and intonation are exceptional.

In addition to her song-styling chops, the compositions Souza co- authored here—eight of them, demonstrate that she has a flair for the melodic and poetic. The ensemble and brief solo outings across the board are First Class and without studio sterility.

The famous Michelin Travel Guide may rate the world's hotels and attractions and not musical fare. Perhaps if they did, Hotel Souza would score extremely well. Select any musical door here and a Lady of exuberant talent and taste awaits.

Paris; Night Demon; My Foolish Heart; Delectable You; Break My Heart; I Heard It Through the Grapevine; Wake Up; I've Got It Bad; Full Moon; Dindi; Lie to Me.