By MARK CORROTO
February 16, 2013
Sign in to view read count 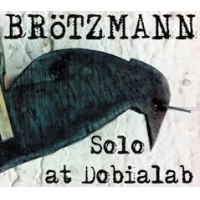 Never at a loss for words (or, in his case, notes), saxophonist Peter Brötzmann is, nonetheless, one to speak only when necessary. Meaning, he chooses his sounds carefully.

But get a glimpse of his solo work. Beginning with Solo (FMP, 1976), 14 Love Poems (FMP, 1984) and the more recent Solo + Trio Roma (Victo, 2011), the great man demonstrates his restrained, muted, and daresay understated approach to music making.

Same for this live recording from the 2010 Dobiartebventi Festival in Staranzano, Italy. Never mind the crowd noise (who carries on a conversation in such an intimate setting?) or the motor scooters that occasionally roar by; this was a magical night.

Brötzmann, armed with a supply of instruments, opens on tenor saxophone. After a bellowing roar he settles into the eighteen-plus minutes of "Dobia 1," improvising off a repeated blues pattern. Is this a nod to American jazz? He sounds more like John Coltrane than John Butcher here. Switching to taragato and eventually B-flat clarinet, he works a more open- ended territory, searching for ideas without meter. These explorations, instant compositions, are sometime splattered via tenor or shifted and sorted with Brötzmann's overblown alto. His voice, that now recognizable speech, gets better and better with age.