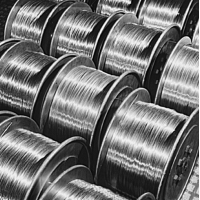 After its impressive debut, it is gratifying to report that the Fataka label seems set to continue in similar vein. Recorded by Sebastian Lexer in May 2011, White Cable, Black Wires follows the pattern of the first two Fataka releases, featuring a small, intimate setting involving a key London improviser— this time, bassist John Edwards paired with Korean-born cellist Okkyung Lee. Across five pieces ranging in length from just under six to just over eleven minutes, the pair thrives in the comparatively rare context of an improvising string duo.

Although Edwards and Lee are both accomplished duo players with other instruments, it is hard to recall either previously dueting with another string player. However, Edwards is a member of the Stellari String Quartet which recorded Gocce Stellari (Emanem, 2009), a textbook example of an all-strings improvising ensemble. Any such grouping (and Barrelhouse Chuck is another obvious example) inevitably faces the issue of avoiding the language—in particular, the clichés—of chamber music.

For various reasons, this duo seems not to find that a problem. As improvisers, Edwards and Lee are too inventive and savvy to get sucked into conventional patterns of playing, instead preferring to create their own rather than borrow anyone else's. Also, the pairing of double bass with cello is so uncommon that clichés for the combination do not yet exist. Well matched, Edwards and Lee soon get stuck into what they do best; each of them is an energetic and physical player, capable of extracting a wealth of sounds—conventional and otherwise— from their instrument. From the off, that is exactly what they both do, simultaneously trading ideas and phrases which pass backwards and forwards between them, constantly evolving and coalescing into a fluid soundscape all their own. In that, they are greatly aided by the sounds of their instruments, which are distinct enough to be easily separable but close enough to fit together and complement each other, at times sounding like a composite of the two.

Across these five tracks, the pair produces music of contrasting moods and intensities, both within tracks and between them. So, "WCBW I" opens relatively quietly and steadily, then builds momentum and volume until it is bursting with barely contained energy. The level drops as both players shift down a gear, only for the build up to begin again just as effectively as before. Thrilling stuff, but far more than just thrills—including rhythmic sophistication, rich melodic invention and empathetic interplay. A duo to cherish.