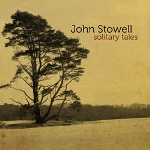 An entire disc of solo, improvised guitar music could easily run the risk of sounding like one continuous tune. Fortunately, Portand, Oregon-based guitarist John Stowell applies enough depth and open-minded searching to his nylon-string guitar to keep things interesting throughout Solitary Tales. The eleven-track disc was recorded live at the home of master guitar luthier Mike Doolin, who builds guitars for Stowell. Relying heavily on single-note lines, the guitarist seems to pull arching motifs out of thin air, eschewing clichés while maintaining a swinging essence.

Stowell gives contemplative readings to Cole Porter's "Everything I Love" and Bill Evans' "Funny Man." Steve Swallow's "Outfits" contains some of the disc's most inventive lines, with breathtaking leaps across the fret board. Ornette Coleman's "Blues Connotation," a disc highlight, jumps out as a bluesy surprise, as Stowell digs in with spirited phrasing.

The bulk of the recording is comprised of Stowell's original compositions, including the rhythmic "Fun With Fruit," the harmonically lush "Behind the Scenes" and the swingingly unpredictable closer, "Wybleing." Thick and juicy chord clusters bring out a thumping, unhurried pace on the hypnotic "Friendly Giant."