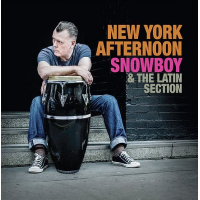 The pervasive myths of New York are of a whole different order to those of just about any other world city. If 'Swinging London' ever existed before the offshore 'investors' moved in, it was long ago reduced, as the Clash put it, to the 'ring of that truncheon thing,' yet New York has somehow kept its mystique. Perhaps it's just a whole different level of myth, an Instagram filter on a rose tinted memory of a construction learned from beloved music or films, that is a trap for the unwary. The ad man clichés of backlit steam from subways, or torrents from broken fire hydrants enlivening impromptu block parties has to be balanced against a shorthand for the freshness of celebrating difference with the eyes of a traveler —a balance that Snowboy, Mark Cotgrove, just about gets right on this his nineteenth album.

The headlines this time around will largely be taken by the guest slots—Marc Evans' warm, melodic vocal on the title track stays just the right side of NYC kitsch and is impossible to dislike -imagine Cotgrove took Gregory Porter dancing down at London's Dingwalls in the 1990s. Hear it once and you'll be humming it for a week, particularly if you hold any affection for Masters at Work's 1997 seminal Nu Yorican Soul project or the George Benson cover of Donny Hathaway's "The Ghetto" (MAW remix naturally). With regular saxophonist Gary Plumley on sabbatical in India, Pete Wareham from Acoustic Ladyland and Melt Yourself Down drops by to add some incendiary lines including collection highlight "Better." This track was written and sung by soulful Bostonian singer-songwriter Jen Kearney whose lyric of recovering from setbacks generally and addiction specifically adds a bit of grit. Kearney is also showcased on penultimate track -another of her compositions "Oxen Free." Here the breeziness of the horn line rubs against the lyric of searching for peace in silence and self-discovery, set against an alternative of plotting a "tragic hero story of loss and vindication."

Best of all though is the 9 minute plus instrumental latin jazz workout "The Triple Bluff" that closes the album. It starts with an abrasive Hammond and horn opening, building through an intense middle section to an explosive three minute climax in which Wareham solos prominently. Artists used to scam DJs with records like this—so accurate in terms of 'Rare Groove' details that it would be easy to pass it off as a previously undiscovered Fania session, liberated from the vaults on exclusive white label. Amusing as these shenanigans can be, most artists would prefer to be judged solely on the music without either the subterfuge or the limiting pre-conceptions, so we can only hope Snowboy and co get the recognition they deserve.

Make no mistake New York Afternoon is an album that oozes quality—from the musicianship and the compositions through to the uniformly excellent production levels. If it is true that there is nothing here as gorgeous as Anna Ross' vocal on Snowboy's 1992 Dorothy Moore cover "Girl Overboard," equally there is nothing as self-consciously 'zany' as his latin style "Anarchy in the UK" either. The tracks with Kearney in particular stand out, not only for their innate quality but also for the hunger and desire to further develop Cotgrove's music. But these are just part of the story on a consistently strong set that pulls off the difficult trick of working as both home listening and on the dancefloor, with the practiced ease and class that we have come to expect from Snowboy. Highly recommended.