Shauli Einav Quartet: Beam Me Up 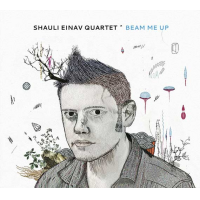 Beam Me Up is Shauli Einav's fifth album as a leader, but his first as a new father. This is worth mentioning because jazz is, as we all know, something that is lived. How could such a momentous change not manifest itself in one's music? Here, it's quite evident though nothing about the album itself speaks directly to fatherhood or childhood. In a brief liner note, Einav ruminates on those magical moments when music transports one into the present moment, away from life's banal mundanities. "Beam Me Up" serves as a Star Trek-based metaphor for these reality shifts. Yet, the tenderness of Einav's soprano on "Assai" and the raw emotionality of the album's sole ballad, "Ten Weeks," both speak directly to the quiet joys and puzzling uncertainties of new parenthood. A unexpectedly haunting, intimate duet with guitarist Pierre Durand, "76 San Gabriel" explores similar emotional terrain via chiming dissonances and unusual timbres.

A key representative of the early 21st Century blossoming of Israeli jazz, Einav has set up shop in Paris where he's had no trouble finding equally-talented young musicians to work with. Though none of his bandmates are familiar to me, they clearly have what it takes—both chops-wise and creativity-wise—to gracefully deal with the complexities of Einav's compositions. While remaining firmly rooted in jazz, Einav's pieces are characterized by striking, substantial melodies which take quite a while to unfurl. The plaintive sing-song of "1415" recalls classical chamber music. This is reinforced by a series of rapid-fire bass-piano unisons before Gautier Garrigue's nimble drums kick the quartet into jazzland. "Tao Main" is underpinned by another complex bass-piano unison line. Einav's tenor soars above until the time shifts from 6/8 to 4/4. Paul Lay's piano solo here is brilliant; thorny and quirky in all the right places, he's a hard-hitting, percussive player who brings Randy Weston and McCoy Tyner to mind. Lay switches to the Fender Rhodes on the title track, a sly bit of oddball funk that left me wanting to hear more of this side of Einav's music. Florent Nisse's bass solo here is tuneful and melodic in ways that bass solos usually aren't.

One of the year's most remarkable albums, Beam Me Up is a generous slice of state-of-the-art 21st Century jazz. If nothing else, Beam Me Up demonstrates Einav's tremendous musical range. His band is right there with him, doing heart-stopping things all along the way. As if the listed tracks weren't enough, an untitled eighth tune appears after "76 San Gabriel" and an additional eight minutes of silence. Easily the most traditional tune here, Einav's patient, husky tenor channels the spirit of Ben Webster, his mentor once-removed via Arnie Lawrence who discovered the young tenor man during a visit to Israel.