Smokey Robinson at the NYCB Theatre at Westbury 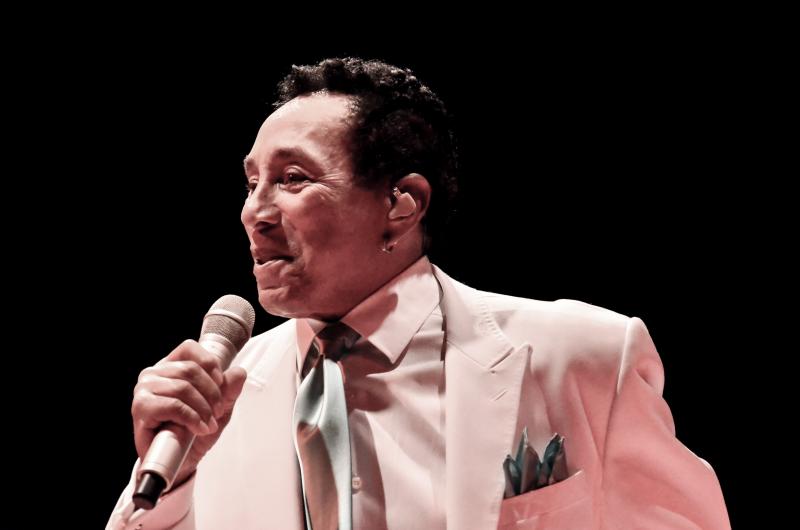 Smokey Robinson stood at the center of the small revolving stage of the NYCB Theatre at Westbury. It was just him and a lone spotlight, the band situated off-stage in the pit, Robinson, dressed all in white (white suit, white shirt, white shoes and a contrasting dark tie) commanded the stage and had the audience's full attention. "Stevie Wonder is my brother," he said. "He should be called Stevie Wonderful...One year I was at the Motown Christmas Party when Stevie came up to me and explained that he had some music for a song but couldn't come up with the lyrics. He handed me a tape and asked me to help. I said I'd listen to the tape and see what I could do. He even offered to drive me home so I could get started. I said, 'no thank you.' Stevie drives too fast." When an audience member, in a very shocked tone, said, "He does?" The crowd erupted. Robinson, stopped, paused, smiled and slowly said, "Yeah, he does." When the people seated near the woman explained that Wonder is blind, she shrieked an embarrassed, "Oh my God!" The legend was laughing so hard, he doubled over. He then asked the woman if he could bring her to all of his shows. Everyone in the intimate venue (audience members, band members, ushers, bartenders and waitresses) smiled and had a good chuckle. Robinson continued, "And this is what we came up with." Robinson and the band then ramped-up a fantastic version of "Tears Of A Clown" that was almost as memorable as the song's introduction.

Still more memorable than the introduction and even that particular song, is Robinson's life and career. A pop and R&B singer-songwriter, record producer, and former record executive, many consider Robinson to be the true architect of the Motown sound. He was the founder and front man of the Miracles and served as the frontman, songwriter and producer. He led the group from its formation in 1955 (when it was known as the Five Chimes) until 1972 when he announced that he was retiring from performing to devote more time to his duties as Vice President of Motown Records.

Robinson's retirement didn't last long. He returned to the stage and the studio and in 1973 released the eponymous