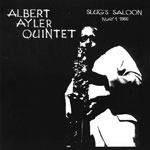 Albert Ayler's name has come to mean different things to different people. Some think of him as the ultimate free jazz musician, others a fraud; some know his connection and subsequent projection of church music, and a few people actually knew him as a good friend. His death in 1970, an apparent suicide at the age of 34, guaranteed that parts of his life would remain shrouded in mystery.

This two-CD set (reissued for the set's fortieth anniversary) piqued my curiosity with the only appearance of a young Ronald Shannon Jackson (listed as Ron Jackson) on drums and the inclusion of violinist Michael Sampson. Compared to, say, Witches and Devils, Jackson's fast and powerful drumming urges Ayler and brother Donald (on trumpet) on to some of their most intense playing on record. Where the '64 quartet with different players known for being "free jazz" musicians has many moments of introspection, Slug's Saloon offers catharsis.

Yet what are we to think of the barely audible violin and the totally inaudible bass? Simply a recording flaw? At times, especially on the second disc (second set?), the violin never stops playing. The music is either very soft or very loud, and the unique vibrato of Ayler's sax playing is de-emphasized, his more lyrical, searching quality blocked. However, there are also moments of great joy: about six minutes into "Bells, the entire band (which again sounds like trumpet, sax and drums) is totally focused on the melody of this sort of children's march. Also at this point you hear someone in the audience talking as if he's closer to the mic than the band. From here on both Aylers launch into twisted, dark, searching solos.

This music as a whole doesn't use harmony as a basis for improvisation. It has a kind of trance-like quality that arises from repeating the nursery rhyme-ish, calypso-like melodies over and over again. It brings jazz back to an earlier time, perhaps before Louis Armstrong and New Orleans jazz, which emphasized collective improvisation based on simple melodies. Indeed, John Kruth's good liner notes refer to Hurricane Katrina... and many mysteries continue.

Truth Is Marching In; Our Prayer; Bells; Ghosts; Initiation.