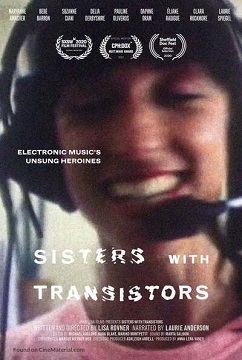 The history of electronic music has always been a male-dominated tale, which is odd given just how formative women have been in its development. Writer and director Lisa Rovner's fascinating documentary Sisters With Transistors addresses this historical imbalance in honoring the pioneering women who forged uncharted paths in electronic music/experimental sound.

As narrator Laurie Anderson relates, it is a story of ..."women who hear music in their heads, of radical sounds where there was once silence, of dreams enabled by technology."

It is also a tale of courage and steely perseverance, for electronic musicians/sound experimentalists such as Laurie Spiegel, Suzanne Ciani, Delia Derbyshire, Daphne Oram, Eliane Radique, Bebe Barron, Pauline Oliveros, Wendy Carlos and Maryanne Amacher had the odds heavily stacked against them. The male-dominated radio stations, record companies, venues and funding bodies represented a seemingly insurmountable wall of indifference and hostility in the face of their creativity.

In spite of these barriers, it is the resourcefulness of these single-minded women that largely shapes Rovner's narrative. Not only did they build their own instruments, but they also built their own studios, organized their own concerts and generally smashed holes in the aforementioned wall.

Laurie Spiegel, perhaps best known for developing the algorithmic composition software Music Mouse in the mid-1980s, sums it up thus: "Technology is a tremendous liberator. It blows up power structures."

At the distance of half a century or more, it is unsurprising that most of the instruments look like clunky props in an old sci-fi B-Movie, but the documentary leaves no doubt as to their groundbreaking nature, and the artists' skill and imagination in creating entirely new sonic worlds.

It's worth remembering that audiences, critics and industry professionals alike were generally encountering these daunting instruments for the first time. The powerful, alien sounds drawn from them by the subjects of Rovner's film must indeed have seemed quite extraordinary in their day.

The documentary covers the period from the dawn of electronic music in the 1930s to the present day. The earliest live footage—unfortunately without sound—hails from 1934, and captures Clara Rockmore, the Lithuanian concert violinist, playing the theremin.

Designed by Russian physicist Leo Theremin in 1920, the theremin was an electronic instrument whose antenna responded to the movement of the controller's hands in the air. Rockmore was an expert on this strange instrument [forty years before Led Zeppelin's Jimmy Page dabbled, and sixty years before Jean-Michel Jarre-ed] but suffered the indignity of not being taken seriously.

"I was a freak at the time," Rockmore recalls years later. "The public had to be won over into thinking of it as a real artistic medium played by an artist. And I won them over," she exclaims defiantly.

The attraction of electronic music lay not just in its novelty, but in its dynamic nature. Ciani relates: "In electronic music you're not dealing so literally with the architecture of modes or harmonies—those building blocks of classical music—you're dealing in energy."

This entirely new form of art, the intersection of science, life and sounds, as narrator Anderson puts it—represented a bold attempt to capture the sound of the electrified world.

It was also music to be listened to and experienced differently. Maryanne Amacher, who explored the sounds of urban landscapes, said: "Much of our music, classical, pop, has this beat, has this gallop, has this trot. I'm interested in music that communicates ideas."

One of the most famous pieces of electronic music ever recorded was the original theme tune to the science fiction TV series Dr. Who, created by Delia Derbyshire and first broadcast in 1963. In a clip from 1965, Derbyshire is seen demonstrating the rudimentary multitracking techniques that became a staple of the BBC Radiophonic Workshop, an innovative organisation in the history of electronic sound effects, of which Derbyshire was a key member. "We can build up any sound we can possibly imagine," relates Derbyshire.

Born in Coventry, England, in 1937, Derbyshire credits her love of abstract sound to the eerie wailing of air-raid sirens she heard as a child during the German bombing of the city during WWII. "That's a sound you hear you don't know the source of it as a young child. It's an abstract sound and it's meaningful, and the all-clear, well, that's electronic music."

Another pillar of the BBC Radiophonic Workshop was Daphne Oram, whose imagination was fired by a visit to the 1958 World Fair where she heard Edgar Varese and Le Courboisier's "Poeme Electronique" played through 350 speakers to synchronized projections. Oram, who set up an independent recording studio before the decade was out, developed her own graphic representation of sound—a form of electronic musical notation.

Just three years later, Oram provided an electronic score to the British horror film The Innocents (1961). It wasn't the first electronic music soundtrack to a film—that landmark belonged to Bebe Barron and her husband Louis Barron, who created the entirely electronic soundtrack to the science fiction film Forbidden Planet (1956).

Not everyone was impressed by the groundbreaking feat. Louis Barron's son, David, explains how the soundtrack had to be credited as "electronic tonalities," after pressure from the Musicians' Union, who, perhaps fearing for their future livelihood, did not want it considered as music.

The "but is it music?" charge was one that these pioneering figures had to contend with almost continuously. Clearly bored by the insinuation, Maryanne Amacher responds to the same question from a journalist—in 1970—with the dignified swipe: "Kind of an old question."

Listening, deep listening was the key to appreciating and relating to these early forays into electronic music/experimentation.

"Listening is the basis of creativity and culture," suggests accordionist and electronic musician Pauline Oliveros, in an observation of socio-political resonance. "How you are listening is how you develop culture, and how a community of people listen is what creates their culture."

In the final scenes of the film, shot in 2018, an emotional Eliane Radigue, listens to contemporary musicians interpret her hypnotic music. "Thirty or forty years ago it would have been impossible," the then 86-year-old composer states. "For the first time I'm hearing the music I've been dreaming of all along."

That is has become a little easier for today's female electronic composers is in large part thanks to the pioneers of Rovner's film who prised open the doors. The vocal testimony of several contemporary practitioners underlines the empowering influence of those woman who went before and provides a hugely positive message to take forward. Rovner's film is important on both these scores.

Artfully shot, with a steady stream of striking images that speak to the evolution of the 20th century, (the political and social upheaval, the impact of war, shifting gender roles and startling technological changes), Sisters With Transistors is a heartfelt, though unsentimental homage to the female history makers of electronic music. Essential viewing.