By Friedrich Kunzmann
June 5, 2021
Sign in to view read count 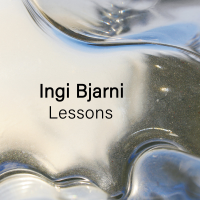 In the very brief liner notes accompanying this solo debut record, the Icelandic pianist-composer Ingi Bjarni Skúlason talks about the difficult challenge it proved, to record and produce his piano music all by himself. With regard to the timing of the recording, he admits he does not believe there is ever a "right time" for doing anything, "so why not do it now?." As many jazz releases have proved, Bjarni was not the only one to have this idea during the isolated pandemic year, and others will surely follow. But the pianist's ten compact elaborations on Lessons harbor their own unique depths and colors, setting Bjarni apart from his peers. Echoes of Russian composers ring through the solo recital, reflected in haunting waltzes and extensive classical cadences which seamlessly blend through- composed material with breezy improvised bits.

A cinematic quality pervades much of this neo-romantic piano music, revealing firm ties to harmonic traditionalism. The minor-key takes center stage as patient chords ascend in the left-hand while the right elegantly navigates through logical but somehow unfinished melodies—question marks popping up at various moments throughout the different themes. The opener being titled "Imperfect" might be a clue that there lies intent behind this impression.

Dark and dramatic are the progressions and the heavy stabs into the keys that give sketches like "Andrúm," "Sense" and "Kynnast" their form, bringing to mind the Tchaikovsky way of building tension as contrasting motifs introduce softer counter-phrases, reminiscent of catchy high-pitched themes from music boxes. As the pieces unfold, the improvisational proportions grow and Bjarni's playing becomes more complex—spontaneously introducing counterpoint in the left hand and fluent melodic syncopation in the right. At the end it is not innovation that distinguishes the pianist's scores but rather a certain richness in ideas and the diligence with which they are executed.

Conceptually, the music lightens as the album progresses, turning into an impressionist maze on songs such as "Impulsive" and "Havneringen," where tonality—while still very much tonal—becomes slightly more ambiguous, giving Bjarni the space and whim for outside improvisation and minimalist experiments in regard to tone and timbre. "Havneringen" takes this aspect to the limit, finding the pianist drawing cyclical loops in eights as form and structure disappear.

As it opened, the album ends with a Waltz, closing the proceedings in a full circle. Ironically, the farewell "Best Wishes" starts on a major triad which then climbs to a minor tonic in a VI-Vii-I movement. The simplistic maneuver is the song's most basic foundation and functions as a juxtaposition between the album- dominating minor and the rarely occurring major key, but blurs as Bjarni piles notes and the bars grow denser. It is a reconciliatory ending to an album which breathes heavy and plunges deep. To Bjarni, "the year 2020 was a year of lessons, both in music and in life." On the album, he digests these lessons and thereby passes them on to the listener, a process that is not always easy but often rewarding.