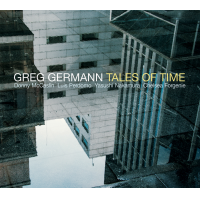 Tales of Time is the sort of album musicians are most apt to dissect and appreciate. New York-based drummer Greg Germann uses various time signatures to subdivide eleven of his original compositions, building a strong rhythmic platform from which to launch his assorted themes. Germann supervises a quartet whose other members are tenor saxophonist Donny McCaslin, pianist Luis Perdomo and bassist Yasushi Nakamura (singer Chelsea Forgenie is front and center on the ballad "Time to Move On").

If rhythmic variations alone were enough to win the day, Germann and Co. would be home free. But rhythm, essential as it is, serves only as a substratum, relying heavily upon a handsome thematic overlay and keen improvisational skills to suitably wrap the musical package. While Germann's compositions are never less than agreeable, there aren't many that rise further—and after a vigorous start ("Rush Hour," "Bli-Fi"), the mood becomes placid, even introspective, although "Misinformation" gathers momentum after a quiet beginning, "Fuguearella" does the same, and there's a brisk tempo change midway through "Rosetta Stone."

Whatever the pace or penchant, Germann, Perdomo and Nakamura bend their shoulders to the wheel, ensuring a steady rhythmic pulse. Perdomo is an admirable soloist as well, on piano or Fender Rhodes ("Quarantine," "Misinformation"). He's especially bright and pleasing on "Fuguearella." As for McCaslin, even though technically flawless, his anomalous solos are admittedly an acquired taste. He has plenty to say; one only wishes he would say it more quietly, and in a lower register. Once past that, McCaslin more than pulls his weight. "Time to Move On" is no doubt well-meaning, but like most contemporary songs, its lyric is nondescript, as is Forgenie's vocal.

Germann set out with a definite plan in mind ("each song tells a story") and more than likely reached his goal. There are stories here; it remains for the listener to apprehend their purpose and determine their merit. From one observer's perspective, the plots may be uneven but their substance overrides any weaknesses.