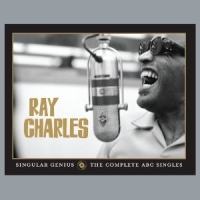 Handsomely appointed, Concord's Singular Genius—The Complete ABC Singles offers an example of intelligent and succinct programming and assembly in the waning days of the compact disc. This individual items collection were produced during the heyday of the 45 RPM single, which is to say during the time of alphanumeric telephone exchanges. It represents all of Charles' ABC single releases between 1960 ("My Baby, I Love Her Yes I Do") and 1973 ("Ring of Fire"). What exists in between is nothing less than the most important soul and rhythm and blues recordings of the period.

Between 1953 and '59, Charles recorded for Ahmet Ertegun and Jerry Wexler at Atlantic Records, where he fused blues and gospel, creating what would become soul music, introducing this new hybrid with songs like "Mess Around," "I Got A Woman" and "Hallelujah, I Love Her So." It was no small controversy at the time, Charles' melding of the sacred and profane into the most exciting popular music being made at the time.

When Charles' contract ended in late 1959, he signed with ABC-Paramount Records, where he was offered a more lucrative contract than typical at the time, including more generous royalties and, more importantly and unique, eventual ownership of his masters. Charles was also given carte blanche creative control over his recording. Initially, he stayed the course of what he started at Atlantic with singles like "Sticks and Stones" (covered by Joe Cocker on Mad Dogs and Englishmen (A&M, 1970)), "Hardhearted Hannah," "Hit The Road, Jack" and "Unchain My Heart." However, Charles did indicate an alternate direction with the release of "Georgia On My Mind," where the singer revamped the old Hoagy Carmichael classic and, once again, changed the course of popular music.

In April 1962, Charles released Modern Sounds in Country and Western Music, often cited by writers as Charles' finest, and most important recordings. It spawned a string of hits that included Don Gibson's "I Can't Stop Loving You," Eddie Arnold's "You Don't Know Me" and the traditional "Careless Love." Here, Charles fuses his recently minted soul sound with Country and Western music, producing a product that was to bring him his greatest crossover success and widest popular exposure.

It was this final fusion that carried Charles to both the end of his ABC association and waning popularity in the face of rock music and the 1970s. This is not to imply that Charles was done creatively. With his place in popular music history ensured, Charles ultimately became what Louis Armstrong was late in his life: an artistic ambassador for America and the world. The soundtrack for this ambassadorship is what populates Singular Genius—The Complete ABC Singles—a collection that, by assembling music of such enduring importance, is head and shoulders above any of its competitors.

CD1: My Baby (I Love Her Yes I Do); Who You Gonna Love; Sticks and Stones; Worried Life Blues; Georgia on My Mind; Carry Me Back To Old Virginny; Them That Got; I Wonder; Ruby; Hard Hearted Hannah; Hit the Road, Jack; The Danger Zone; Unchain My Heart; But on the Other Hand, Baby; Baby, It's Cold Outside; We'll Be Together Again; At the Club; Hide Nor Hair; I Can't Stop Loving You; Born to Lose; You Don't Know Me; Careless Love. CD2: Your Cheatin' Heart; You Are My Sunshine; Don't Set Me Free; The Brightest Smile in Town; Take These Chains from My Heart; No Letter Today; Without Love (There Is Nothing); No One; Busted; Making Believe; That Lucky Old Sun; Ol' Man Time; Baby, Don't You Cry; My Heart Cries For You; My Baby Don't Dig Me; Something's Wrong; No One to Cry To; Smack Dab in the Middle; I Wake Up Cryin'; Makin' Whoopee (vocal) (live); Makin' Whoopee (piano) (live). CD3: Teardrops from My Eyes; Cry; I've Got a Woman (Part 1) (live); I've Got a Woman (Part 2) (live); Without a Song (Part 1); Without a Song (Part 2); I'm a Fool to Care; Love's Gonna Live Here; The Cincinnati Kid; That's All I Am To You; Crying Time; When My Dreamboat Comes Home; Together Again; You're Just About to Lose Your Clown; Let's Go Get Stoned; The Train; I Chose to Sing the Blues; Hopelessly; I Don't Need No Doctor; Please Say You're Fooling; I Want to Talk About You; Something Inside Me. CD4; Here We Go Again; Somebody Ought to Write a Book About It; In the Heat of the Night; Something's Got to Change; Yesterday; Never Had Enough of Nothing Yet; That's a Lie; Go on Home; Eleanor Rigby; Understanding; Sweet Young Thing Like You; Listen, They're Playing My Song; If It Wasn't for Bad Luck; When I Stop Dreaming; I'll Be Your Servant; I Didn't Know What Time It Was; Let Me Love You; I'm Satisfied; We Can Make It; I Can't Stop Loving You, Baby; Claudie Mae; Someone to Watch Over Me. CD5: Laughin' and Clownin'; That Thing Called Love; Till I Can't Take It Anymore; If You Were Mine; Don't Change on Me; Sweet Memories; Feel So Bad; Your Love Is So Doggone Good; What Am I Living For; Tired of My Tears; Look What They've Done To My Song, Ma; America The Beautiful; Hey Mister; There'll Be No Peace Without All Men As One; Every Saturday Night; Take Me Home, Country Roads; I Can Make It Thru The Days (But Oh Those Lonely Nights); Ring of Fire.