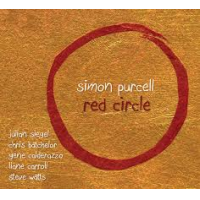 The title of this debut CD by UK Pianist Simon Purcell, Red Circle, is rich in metaphor and layered meanings. Does it for example refer to the belief amongst practitioners of ritual magic that a marked out circle can contain energy in a sacred space or sometimes offer a form of magical protection—surely a metaphor for music or the spotlight on a performer? Or is it a reference to the similar ideas in eastern religions where, for example, a mandala can be used to mark out a sacred space for meditation?

A possible clue is provided by the artwork used as the cover for the CD -artist and Methodist Minister Jan Richardson's 'Painted Prayerbook' that refers to a story about the artist Giotto. The story goes that Pope Benedict IX approached the artist seeking a demonstration of his talent—Giotto responded with a submission comprising entirely of a simple red circle on plain paper. Rather touchingly, the simple beauty of this response was recognized as sufficient and he got the job. Now if any form of artistic endeavour needed to heed Giotto's confidence in the power of simplicity, it is surely modern jazz!

All of these layers of meaning might conceivably be intended and applied to Simon Purcell's music—could, for example, the performance environment be interpreted as a sacred space, for an appropriately inclined jazz musician? Does the title hint at Purcell's struggle to find space for creative magic in a busy life in the many years that have passed between his mid-1980s emergence and this debut, or does it suggest a fear of over complicating the feel of the music? It is deliberately left open and we'll never know the answer definitively, but it is a measure of how good this album is that it is so enticing to try.

Either way, Purcell emerged into that fertile mid-1980s London jazz club scene with his band, Jazz Train, that apparently included Cleveland Watkiss. This led to his playing with musicians of the calibre of the late Kenny Wheeler, Eddie Henderson and Julian Arguelles over the years when his passion for providing jazz education would allow. Purcell has been highly successful in the world of education where he was awarded 'Jazz Educator of the Year' at the Parliamentary Jazz Appreciation Group in 2006 and currently holds the position of Head of Jazz at a leading London Conservatoire. The creative flames still burned however and as part of the 2014 London Jazz Festival he is to launch this excellent, if rather overdue, debut album on Whirlwind records.

The line up for the sessions is excellent including Partisans Gene Calderazzo (drums) and Julian Siegel (saxophones) alongside Loose Tubes Chris Batchelor on trumpet and Steve Watts on double bass (wrongly credited as drums on the sleeve). All of the eight instrumental pieces are entirely Purcell compositions, and there is a significant coup in getting Liane Carroll to contribute and sing her own lyric on the bonus version of "Ithaca" that closes the album. Ithaca is, of course, the island kingdom to which Odysseus eventually returns after the Trojan war in Homer's "The Odyssey" -to eventually be reunited with his faithful wife Penelope. Carroll is in fine voice as ever and pitches both lyric and vocal perfectly somewhere between languid melancholy and yearning.

Other highlights include the lively opening track "Spirit Level" which quickly hits a mid-60s Blue Note groove, with a soupcon of spy movie soundtrack, grabbing the attention and drawing the listener in. The rhythm is particularly important here with excellent work from Watts and Calderazzo allowing the soloists in general and Purcell in particular room to stretch out. Similarly on my personal favourite track "Dark Night" the percussion and bass line lock into a pitching, bobbing, rhythm reminiscent of early Alice Coltrane teeing up stellar solos from Siegel and Batchelor. "Pandora" too features invigorating interplay between Siegel and Batchelor that Purcell eventually arbitrates with a thoughtful solo.

The overall feel of the album is of that period between modal jazz of the late 1950s/early 1960s and the jazz-rock fusion experiments of the latter part of the 1960s. Fans of say Wayne Shorter and Herbie Hancock will find much to enjoy—for example the way that Purcell's piano picks its way through the solo on "Red Circle—Enchantress" over Calderazzo's cymbal work has echoes of "Maiden Voyage." While there are these reverberations of the past, they never overwhelm the music which is without exception well played, interesting compositions. The way that Purcell interacts with both Siegel and Batchelor on the appropriately brooding "Answers for Job" is excellent as is the mesmeric piano line he feeds between contributions as if reflecting thoughts on the challenges posed to Job by the other soloists.

While this is an album that uses the jazz styles of the past as a template, the quality of the playing and compositions makes it stand out from the crowd. To think that Purcell has waited nearly 30 years from his initial emergence to record a debut CD this good is utterly extraordinary—good things may well come to he who waits, but any friend or long term admirer of his work would need the patience of a saint. Still the good news is that we now have this wonderful jazz record to enjoy—but probably best not to count on seeing a follow up this side of 2044. Highly recommended.